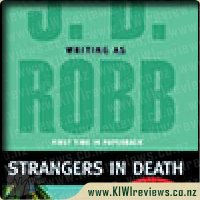 Technology may be different in 2060 New York, yet the city is still a place of many cultures and great divides. But as ever, some murders receive more attention than others-especially those in which the victim is a prominent businessman, found in his Park Avenue apartment, tied to the bed-and strangled- with cords of black velvet.

It doesn't surprise Lieutenant Eve Dallas that Thomas Anders's scandalous death is a source of titillation and speculation to the public-and of humiliation to his family. But while people in the city are talking about it, those close to Anders aren't so anxious to do the same. With some help from her billionaire husband, Roarke, Eve's soon knocking on doors-or barging through them-to find answers.

But the facts don't add up. Physical evidence suggests that the victim didn't struggle. The security breach in the apartment indicates that the killer was someone known to the family, but everyone's alibi checks out. Was this a crime of passion in a kinky game gone wrong-or a meticulously planned execution? It's up to Dallas to solve a case in which strangers may be connected in unexpected, and deadly, ways.

Eve Dallas's latest case is giving her a headache. Thomas Anders's is found dead, strangled with cords of black velvet and no one is being of any assistance. Everything in Eve's gut and instincts tells her that his wife had something to do with his death, but she has such a hard time finding any proof. Then, Baxter and Trueheart ask for her help with a cold case and they find a link between it and her currant case.

This case strikes me as nothing new, I think CSI or a similar TV show did an episode around the same time where it has a similar plot-line, but it was still a good read. The one thing I really enjoy about these books is that is usually has a good story and some great moments, but also isn't a hard read, so I finish in a day or two.

A good moment in this book was the fight between Roarke and Eve over money. Eve had used her own money for something, and then was reminded that she has an account that Roarke puts money into. Though Eve doesn't wish to use it, as she didn't marry him for his money (despite some peoples point of view), but they do eventually manage to sort things out.

Felix discovers the magic of nature in this book when the moon beckons him from his bed. He dances off into the night, making friends with a parade of creatures (and even the elements) who help him in their different ways to find his own way back home.

Small children are encouraged to daydream, make a rainbow, and be a caretaker of nature. Teaching notes are included at the end of the book so that pre-schoolers can learn to explore the natural world about them.