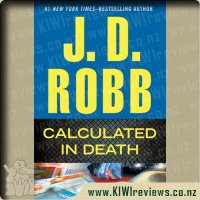 On Manhattan's Upper East Side a woman lies dead at the bottom of the stairs, stripped of all her valuables. Most cops might call it a mugging gone wrong, but Lieutenant Eve Dallas knows better.

A well-off accountant and a beloved wife and mother, Marta Dickenson doesn't seem the type to be on anyone's hit list. But when Eve and her partner, Peabody, find blood inside the building, the lieutenant knows Marta's murder was the work of a killer who's trained, but not professional or smart enough to remove all the evidence.

But when someone steals the files out of Marta's office, Eve must immerse herself in her billionaire husband Roarke's world of big business to figure out who's cruel and callous enough to hire a hit on an innocent woman. And as the killer's violent streak begins to escalate, Eve knows she has to draw him out, even if it means using herself as bait. . . .

I'll get this out of the way now and say that I really hope there is no more books involving the Icove case, it's done it's dash, but other than that (cause you have to have Eve in an awkward social situation at least once per book) this was an ok addition to the series.

I didn't enjoy this book as much as I have the previous instalments and I think that was due to the Icove case side of things, the team is going to go to the movie première of the movie based upon the Icove case. Another little peeve about the book is once again we hear again and again about the big party and then don't get to read anything about it, would like the details at least once.

Tracking down the killer - and possibly the killer of a couple of others related to the accounting firm and audit - takes Dallas deep into the world of finance and illicit money-making schemes about which she knows far too little, which means she turns to Roarke to work out what's really going on. When it becomes clear that she and Peabody may be next on the killer's hit list it, of course, becomes far more personal.

Not a bad addition to the series but certainly not the best either.

Harry Potter is an ordinary boy who lives in a cupboard under the stairs at his Aunt Petunia and Uncle Vernon's house, which he thinks is normal for someone like him who's parents have been killed in a 'car crash'. He is bullied by them and his fat, spoilt cousin Dudley, and lives a very unremarkable life with only the odd hiccup (like his hair growing back overnight!) to cause him much to think ... more...