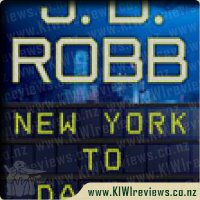 Twelve years ago, Eve Dallas was just a rookie NY cop when her instincts led her to the apartment of Isaac McQueen, a man she discovered to be a sick murderer and paedophile, who was keeping young girls in cages. Now a homicide Lieutenant, Eve is one of the most distinguished officers in the city - and then she learns that McQueen has escaped from jail.

Bent on revenge against Eve and with a need to punish more "bad girls" McQueen heads to Dallas, Texas - the place where Eve was found as a child, the place where she killed her own abusive monster when she was only eight years old. With Eve and Roarke in pursuit of McQueen, everything is on the line and secrets from Eve's past are about to be shockingly revealed.

When Dallas was starting out as a rookie cop, she was on a routine door-knocking assignment when she came across a man who made the hairs on the back of neck crawl. After being forced to knock him out she opened up a room of horrors, Isaac McQueen has abducting young girls, carving a heart with a number on their chest and keeping them prisoner and sexually abusing them.

We cut to nearly 12 years later and a man arrives at cop central with a message meant just for Eve. McQueen has escaped and is keen to start where he left off, yet leaves Eve the message that she will have to come to Dallas (as the state that she was found in when eight years old and in Dallas can be found if you look for it).

In New York to Dallas we have one of Eve's loose ends answered, and it wasn't quite what I was expecting to happen in the book and I did feel that it was tied up very quickly, when I felt that it could have carried on it to the next book. Other than that it was a great addition to the series and one of my favourite.

Ready your lightsabers for action and fight alongside galactic heroes Luke Skywalker, Han Solo and Princess Leia in this Star Wars Sticker Activity Book. Race and win the epic podracing game. Then use your stickers to repair droids, battle Sith Lords and defeat the evil Empire.