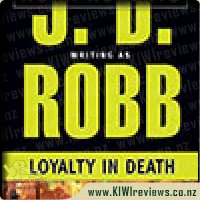 An unknown bomber is stalking New York City. He is sending Eve Dallas taunting letters promising to wreak mass terror and destruction among the "corrupt masses." And when his cruel web of deceit and destruction threatens those she cares for most, Eve fights back. It's her city ... it's her job... and it's hitting too close to home. Now, in a race against a ticking clock, Eve must make the pieces fit--before the city falls.

Who is Cassandra and what do they want with Eve? Why does a weasel contact Eve worried about a friend who has no time for the police and why tell the friend that he is on to something big a few days before he ends up dead? What was he working on and who wanted him dead? These are all questions that must be answered. We also get introduced to Peabody's baby brother, who ends up a suspect in a major investigation and he has links to Eve's case.


The often repeated memories Eve has of feeling helpless while her father abuses her and rapes her is starting to get annoying as it is mentioned in every single book at least two or three times and the possibility is there for some advancement of the story but that never happens and when therapy is offered to help with the feelings and memories she refuses the help. She is normally a strong character but even the strongest of people usually have weaknesses but learn to deal with them. If the author is trying to gain the reader's sympathy then she is failing miserably, in the first few books I did feel sorry for Eve but now I just think it is getting annoying and dragging on for far too long.

I will read the rest of the series in the hope of getting answers.

In 21st-century New York City, tough-as-nails cop Eve Dallas can survive a bombing, seduce her husband, and outsmart a terrorist--all on four hours of sleep.In this book we have Dallas pitted against an enigmatic group of terrorists named Cassandra. With no clear motivation or demands, Cassandra feeds on the thrill of senseless killing and the calculated destruction of Eve's world.

Relying on her own brawn and brains, as well as that of her aid Peabody and her husband Roarke, Eve begins to unravel a mystery that began decades before. When the killer's threats land close to home, Eve knows she has no choice but to gamble her own life for the chance to save her city as well as her loved ones.

While the whole terrorist theme has been done in many a book and movie, Loyalty in Death is still well written and doesn't feel like a copy cat. This is a little more fast paced than previous book and has the added addition of throwing in some of Peabody's family.

Sophia is determined that she and Clara will have a "glorious victory" in the school cross-country. When the big day arrives and the race favourite's "magic shoes" go missing, it comes as a big surprise to Sophia when they turn up in her bag! Accusing fingers are pointed. "Thief!"

This time, the Miniwings have reached a whole new level of naughty. How will Sophia get out of this?