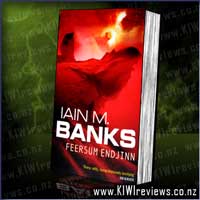 ...and everything is about to change. For this is the time of the Encroachment and, although the dimming sun still shines on the vast, towering walls of Serehfa Fastness, the end is close at hand. The King knows it, his closest advisers know it, yet still they prosecute the war against the clan Engineers with increasing savagery.

The Crypt knows it too, so an emissary has been sent, an emissary who holds the key to all their futures.

Having read quite a bit of Iain's work by now, I feel I have a grasp of what he is capable of... and some of it is truely mind-blowing. This title proved to be no exception... with a few caveats...

Firstly, the book is written in a very unusual style. The world in which it is set is far in our future, that much is obvious. But what we SLOWLY learn is that most of the earth's population has packed up and shipped off to the deepest reaches of space, leaving behind a small percentage who have forgotten 99.99999999999999% of the advanced tech humanity had developed. The only piece of high-tech the remnents still use, is The Crypt... a virtual data network embedded in the very fabric of the giant castle known as the Serehfa Fastness, which is a hugely scaled-up version of normal, where a mountain range easily fits under a giant set of drawers, where continent-sized rooms are normal and entire cities live inside a hanging lightfitting!

The Crypt is not only a datanet, it houses the souls of the dead... well, those who have died more than 7 times in the physical sense at least. You see, you have 7 physical lives, plus 7 digital lives... after which you are catelogued, summaries, and stored in the deeper reaches of the Crypt, where things are seriously warped and identity, as we know it, just isn't a factor.

The big scare-of-the-moment is The Encroachment... where Earth's solar system is passing through a dense nebula dust cloud, causing the amount of sunlight, and thus energy, reaching the surface to drop off. The early signs are starting, that Earth is about to be plunged into another extinction-level ice-age, and there seems no way out... And the frustrating part is... all of this is revealed well into the story... at the start you are dropped into the story as though you should already know this, yet I can find no evidence this is a sequel to another story that gives you all the info that is treated as background. It's almost as though Iain decided to write a story in reverse!

However, being the die-hard sci-fi nut that I am, I stuck with it and found myself more and more drawn into the character of Bascule, the Teller... talker to the lost digital souls of the dead, forever wandering the Crypt's deeper reaches. He has a strange way of looking at his world, as though even he finds it strange. This could be because he is living his first physical life, so isn't too worried what happens to him. After all, he puts his life, and sanity, on the line to track down a talking ant!

Overall... this is a strange tale indeed, full of confusing bits that only become clear as the story winds to a close... and even that doesn't feel like the end really... I found it hard to read Bascule's 'journal entries', since the character is somewhat illiterate and writes phonetically... wich kan mayk things a bit hard 4 any1 2 reed qwiklee... but if you sound it all out in your head, you soon find that you are blitzing through it at almost-normal reading speeds. Speed-readers beware, you'll have your brakes on full for those chapters. Despite that, I found the book quite enjoyable, though I don't recommend it for readers new to Iain's work... this is a bit of a mind-trip into a very warped place... but I LOVED the ending. Nice twist!

For the first time in history, Captain Underpants is in full colour! Read the first book in the bestselling series that gets kids reading!

Fourth-grade class clowns George Beard and Harold Hutchins have created the greatest superhero in the history of their elementary school - and now they're going to bring him to life! Meet Captain Underpants! His true identity is so secret, even he doesn't know who he is!