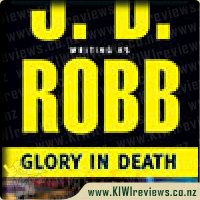 It is 2058, New York City. In a world where technology can reveal the darkest of secrets, there's only one place to hide a crime of passion-in the heart.

Even in the mid-twenty-first century, during a time when genetic testing usually weeds out any violent hereditary traits before they can take over, murder still happens. The first victim is found lying on a sidewalk in the rain. The second is murdered in her own apartment building. Police Lieutenant Eve Dallas has no problem finding connections between the two crimes. Both victims were beautiful and highly successful women. Their glamorous lives and loves were the talk of the city. And their intimate relations with men of great power and wealth provide Eve with a long list of suspects-including her own lover, Roarke.

The second book delivers yet more great action and yet more twists in the story, some were easy to see and didn't come as a shock but some were so well hidden that they were totally unexpected. I'm glad that the characters stayed strong and the story is intriguing enough to keep me hooked and the pages turning. We are learning part of Eve's story and understanding what made her distrustful and highly suspicious of things and people.

Unlike some story lines these books are well done and you aren't left wondering what happened or why as you are with some authors although you are left with a cliff hanger at the end of the book, can't wait to start the third book. There are hints along the way but nothing too obvious as to who the murderer was, that was a surprise but at least not one that dragged on for ages.

The book was easy to read in just a few hours, mainly due to how hard the book was to put down. I can see the rest of the series and none of the books look like they are suddenly very long (some authors when the books gain in popularity the books go from nice and short to a few hundred pages per book) so that means I should enjoy each and every story.

Murder has hit New York again and this time it is a high-profile business woman, as Dallas tried to find the killer and once again get Roarke off the suspect list she finds herself struggling to come to terms with her feelings but also with how much Roarke feels for her and what a true relationship requires from her.

There is, as one would expect, more development across the board. There is a bit more information on the world that they live in, whilst the series is set in the future (a little over 40 years away) it has been shaped by the Urban Wars and has new drugs, weapons, technology etc. So don't let the whole 'set in the future' put you off.

I really enjoyed this book, and what was even better was I got to the end and hadn't guessed who the killer was (though I did get the right vibe off his character). It was lots of fun to see Dallas trying to let Roarke in whilst figuring out she can have it all with him and still maintain her independence.

Having read all the books in the series so far, I can tell you that there will be some great character development, and that's worth half the read.

Score: 10.0
Product reviews for listing 4216: T is for Tauranga
Written by Tommy Kapai

T is for Tauranga is a fun, education based book that takes children on a geographical treasure hunt throughout the Tauranga area, introducing them to local history and other fun facts along the way.