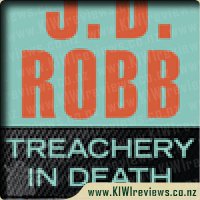 Detective Eve Dallas and her partner, Peabody, are following up on a senseless crimeâ"an elderly grocery owner killed by three stoned punks for nothing more than kicks and snacks. This is Peabody's first case as primary detectiveâ"good thing she learned from the master.

But Peabody soon stumbles upon a trickier situation. After a hard workout, she's all alone in the locker room when the gym door clatters open; and-while hiding inside a shower stall trying not to make a soundâ"she overhears two fellow officers, Garnet and Oberman, arguing. It doesn't take long to realize they're both crookedâ"guilty not just of corruption but of murder. Now Peabody, Eve, and Eve's husband, Roarke, are trying to get the hard evidence they need to bring the dirty cops downâ"knowing all the while that the two are willing to kill to keep their secret.

Eve and her partner Detective Delilah Peabody have just finished catching the bad guys responsible to tasering a man to death and stealing candy bars, chips and other items from his store. Peabody ends up in a fight with one of the criminals and this leads to Dallas recommending that she gets a bit more fit.

After completing her struggles in working out, she overhears a conversation between two cops that is an obvious reference to the fact that they are dirty and into things they should be helping to shut down, and not spreading. The problem is that these are very dirty cops and one of them has a very well known and respected father.

Right from the start we know exactly who is bad and we follow Dallas and her team as they do what they can, to prove without a doubt, that these are dirty cops committing all sorts of crimes. I was very happy that Peabody played such an important role in this story.

I absolutely loved the ending of this story and with how her squad stood up for Eve, and not turned their back on her for going against fellow cops. If you can read the ending without shedding a tear, then please call me, we need to talk.

I believe, in my opinion, that this is one of the better stories of the entire series, and thatâ ™s saying a lot. The story was factual in nature, and the danger was was very real. While I didn't love this book, it is still one of the best in the series.

Geronimo Stiltonix and his crew head to the planet Jurassix to warn its inhabitants of a giant comet heading straight toward them! But the creatures there turn out to be ferocious, dinosaur-like beasts . . . who like to eat rodents. Squeak! Can the spacemice save these aliens and still make it out alive?