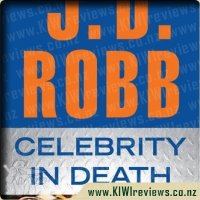 Lieutenant Eve Dallas is no party girl, but she's managing to have a reasonably good time at the celebrity-packed bash celebrating "The Icove Agenda," a film based on one of her famous cases. It's a little spooky seeing the actress playing her, who looks almost like her long-lost twin.

Not as unsettling, though, as seeing the actress who plays Peabody drowned in the lap pool on the roof of the director's luxury building. Now she's at the centre of a crime scene - and Eve is more than ready to get out of her high heels and strap on her holster and step into the role she was born to play: cop.

Good instalment to the 'In Death' series. After 34 books, the reader pretty much knows the routine of what they are getting in the murder mysteries. The difference here is in the regular characters involved; and their interplay and verbal byplay with each other, especially Eve and Roarke; and Eve and Peabody.

This entry to the series begins near the end of a movie based on Nadine Furst's book being filmed about the Icove murders (see Origin in Death). There is almost a 'Clue' like setting as all the characters of the movie, and all the characters they are portraying are all together watching a screening of bloopers from the movie. Of course, being what these stories are, there has to be a murder, and there was. Movie Peabody has been murdered; and movie Eve and movie McNab are prime suspects. Turns out, they are also lovers. (Now there's an image to burn into the readers brains). The rest of the book is pretty stock Eve Dallas and Peabody slicing through the clues to get to the bottom of the murder. Pretty standard for the books; no more, no less than the usual.

The story is a pretty much average read for the series, but fun. It's about what you would expect, and is actually a better read than the last few have been. Eve and Roarke, though; are the best they've been since the early books. There are a few gems of witty and sparkling dialogue between them sprinkled throughout the book.