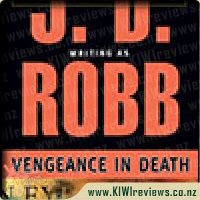 In a time when technology links the law and the lawless, predators and prey can be one and the same...

He is an expert with the latest technology ... a madman with the mind of a genius and the heart of a killer. He quietly stalks his prey. Then he haunts the police with cryptic riddles about the crimes he is about to commit--always solved moments too late to save his victims' lives.

Police lieutenant Eve Dallas found the first victim butchered in his own home. The second lost his life in a vacant luxury apartment. The two men had little in common. Both suffered unspeakable torture before their deaths. And both had ties to an ugly secret of ten years past--a secret shared by none other than Eve's new husband, Roarke.

It was obvious to see that revenge was the motive but not knowing Roarke's full history made the story interesting as we had no idea who wanted revenge or why. Eve had to put her personal feelings about Summerset aside as it was obvious that he was being set up.

This is the first book in the series that actually made me laugh out loud as the descriptions were just so real. I really enjoyed the way some parts were written, it is good to see that the book is well balanced with murder and mayhem on one side, love and romance on the other and humour in between. I am also glad that the murder scenes are not described in graphic detail, but a lot is suggested and left to your imagination.

I am looking forward to reading the rest of the series and seeing how many ways people can be murdered. It would be great if Eve old learn her history, what did happen to her mother would be a good place to start. It is well known by now that she was abused by her father and she has a vague memory of killing her father but there is still a lot of different directions the story can move in.

Dallas hits a tricky note in this book. There is a killer on the loose murdering people in not so lovely ways. The tricky part? They are all linked to Roarke and Summerset and the death of Summersets young daughter back when Roarke still lived in Dublin.

As much as Eve dislikes Summerset, she knows that he is not her killer. Eve must act fast to find out who is though as itâ ™s obvious that the murdererâ ™s grand finale will be Roarke. This book captured my interest from the very beginning. I loved the intrigue about the secret that Roarke and Summerset had from their past and found it entertaining watching it all unfold.

This novel delved into Roarkeâ ™s past which has never really been touched upon that much in the previous instalments of the series. We start to understand the things he had to do to survive. We also get to see just how Roarke loves and stands up for those he cares about. And of course I loved seeing his protective side (again) when it came to Eve.

It's always good when you can touch on the subject that is the past of characters, giving more background to them without it seeming contrived. A good addition to the series.

Features tips and tricks for gamers and interviews from gaming's biggest personalities, including game developers and pro-gamers. Learn how to dominate the biggest online multiplayer games, including LEGO Dimensions, LEGO Star Wars: The Force Awakens, No Man's Sky and Minecraft Story Mode.

Find out facts and stats and unlock the ... more...