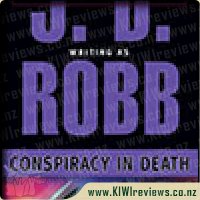 In the late 21st century, on the streets of New York City, a street sleeper is found murdered, his diseased heart removed with surgical precision. His death would typically drop to the bottom of a list of senseless and inexplicable killings, but Lieutenant Dallas, who "would stand for the dead and the living," is not about to let that happen. When her research uncovers similar crimes in several cities that were dropped under mysterious circumstances, Dallas knows she's facing a killer cruel enough to prey on the weakest in society and powerful enough to conspire an extensive cover-up.

To complicate matters further, Dallas faces an equally troubling threat to her career when she's linked to the death of a fellow cop. Now she must fight to restore her good name as well as track down the killer.

In Conspiracy in Death, Roberts creates a futuristic world of evil that Eve Dallas negotiates through tough talk and brute force. While Robb crafts the crimes with great care, she assumes a familiarity with the characters that new readers will lack. But fans of the In Death series and newcomers alike will enjoy the thrill of the chase as Eve Dallas sets out to get her man.

Wow this book is one that is standing out in the series. We see how Eve handles difficult situations, she has to deal with a cop who has a hidden agenda when it comes to Eve so obviously when she ends up dead Eve is a prime suspect. The people who support Eve through the difficult time are really put to the test, after a while I was more interested in finding out what happened to Eve than to find out who the murderer was and the motive for such senseless acts as the victims were homeless or prostitutes who didn't have long to live.

I was surprised to see how far the story twisted, how much things could go badly for Eve. Not surprising however was the flash backs that Eve was having, she always has the same memories of the abuse and rape, never anything more. It would be good for her to find a way to deal with the memories and move on.

The author didn't use a lot of medical terms so a normal person could still follow the story. Some of the ideas in the book are a bit strange, organ donation is replaced by high tech organ regeneration and that made the book a bit far fetched for my liking, some of the laws seem strange as well but since it is set in the future who knows what is possible.

In one of the best books in the series (in my opinion) Dallas is called to the scene of a dead sleeper (homeless person) and whilst there butts head with another cop who seems to have an intense dislike for Dallas. When another sleeper ends up dead Dallas thinks that there is something darker going on than simply dying from the cold.

In this book we are also introduced more to a couple of characters who will become key supporting characters in future books, a great supporting cast (so to say) for Dallas and Roarke.

Along with the murders happening, Dallas also has to face one of her toughest challenges yet and one of her greatest fears when her job comes under fire and she is forced to not only track down a devious killer, but save her career. This takes over the centre of the book and quite a bit after. If you have enjoyed the previous books then you'll be crossing fingers she kicks arse and solve things before the end of the book.

One of my favourite books in the In Death book series.

This is killer and you have been invited to play. And you should play like your life depends on it.

At Cate's isolated boarding school, Killer Game is a tradition. Only a select few are invited to play. They must avoid being 'killed' by a series of thrilling pranks, and identify the 'murderer'. But this time, it's different: the game stops feeling fake and starts getting dangerous - and Cate's the next target. Can they find the culprit... before it's too late?