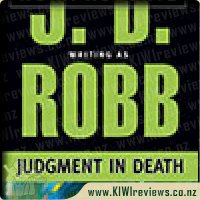 In an uptown strip joint, a cop is found bludgeoned to death. The weapon's a baseball bat. The motive's a mystery. It's a case of serious overkill that pushes Eve Dallas straight into overdrive. Her investigation uncovers a private club that's more than a hot spot. Purgatory's a last chance for atonement where everyone is judged. Where your ultimate fate depends on your most intimate sins. And where one cop's hidden secrets are about to plunge innocent souls into vice-ridden damnation...

Who would kill a cop and how would Eve catch them? We start off with a dead cop who was moonlighting at a club which is owned by Roarke (who else would own half of New York ) and as Eve investigates there are 2 more dead cops , one from the same precinct and one from internal affairs. What is the link between them?

Some parts of the series are starting to get a bit boring, Eve had yet another flashback but this time it was a different memory and one that actually helped her solve the case. Another thing that is getting very repetitive is that criminals always seem to choose properties owned by Roarke to commit the crimes in.

This wasn't one of favourite books, the topic was sad (who wants to work with a dirty cop) and parts were tiring but I would still read it again. I am enjoying how the story develops but would like it even more if there were variations in the theme, surely crime doesn't only happen to Roarke or he has some very pizzeria off competitors who have a serious grudge to settle.

I am looking forward to the next book but I don't have high hopes of things being do e different. I would love to know more about Eve's early years, she is starting to very slowly remember more about her past.

This time around, Eve's hunting a cop killer. A cop killer who seems to be killing cops who may or may not be on the take. Naturally, cops don't like to be investigated, especially by another cop, so Eve's not too popular - but, being Eve, that makes no difference at all to her doing what she has to do.

But just to add another layer of complication, there's a criminal type somehow mixed up in what's going on, who just happens to be a former associate of Roarke's from before he went on the straight and narrow, and he's crazy as well as dangerous because he wants revenge on Roarke and he has no problem at all using Eve to get that revenge.

The bad guy in this book is a nasty piece of work, and he'll be back later on the series, thankfully not too much, but enough to make him a character that you don't really want to run into.

My only issue with this book is that I felt it done too soon after the book that did a major run with Summerset and Roarke, otherwise it's a good addition to the series.