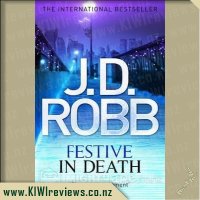 The kitchen knife jammed into his cold heart pinned a cardboard sign to his well-toned chest. It read: Santa Says You've Been Bad!!! Ho, Ho, Ho! It's Christmas, but Lieutenant Eve Dallas is in no mood to celebrate. While her charismatic husband Roarke plans a huge, glittering party, Eve has murder on her mind. The victim - personal trainer Trey Ziegler - was trouble in life and is causing even more problems in death. Vain, unfaithful and vindictive, Trey had cultivated a lot of enemies. Which means Eve has a lot of potential suspects. And when she and Detective Peabody uncover Trey's sinister secret, the case takes a deadly turn. Christmas may be a festival of light, but Eve and Roarke will be forced once more down a very dark path in their hunt for the truth.

I have been a fan of the "In Death" series for a few years now and so it is habit now for me to run onto the library website and pop through a request to hire out the next in the series, with "Festive in Death" I had to wait for a measly 169 people to read it before me. :P

We start off with the murder being discovered, the ensuing detective work attempting to find out who killed said victim despite them being a complete and utter scumbag and of course, more character and friendship building between the main characters. It irked me at first, to see one of the secondary characters being so closely involved at the start, but I was happy to see that that isn't a big part of the book. Phew. The murder itself is pretty basic, but sometimes simple is good and it left more room to focus on all the suspects.

There is a lot of nice touches throughout the book, from Morris starting to regain color in his clothes (a sign that he is healing emotionally), to Eve and Roarke and the life they have carved out for each other, their celebrations and just how much they know and love each other. The last few books have been a bit uniform in that the plot wasn't wonderful and you knew who the killer was, so I was happily surprised to find that I wasn't right about the killer (though neither was the main characters) so that was a plus for this book.

Enjoyed this a little more than the last couple and I've already gone and requested the second (149 out of 149 :P )

Supernatural presents the work of Ross Lovegrove, one of the most interesting and fascinating of the contemporary designers. His work ranges from furniture to high-tech products, from waterbottles to airplane seats, and explores the creation of sculptural and organic shapes using sophisticated technology and materials.