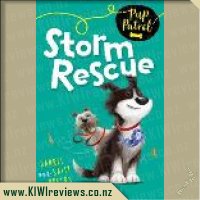 Disclosure StatementFULL DISCLOSURE: A number of units of this product have, at some time, been supplied to KIWIreviews by the company for the purposes of unbiased, independent reviews. No fee was accepted by KIWIreviews or the reviewers themselves - these are genuine, unpaid consumer reviews.
Available:
May 2015

My name is Barnaby Station Stamp of Approval, but you can call me Stamp. Stamp, James and Ace are in the tropical north, ready to enter the Great Atherton K9 Festival! But are those storm clouds on the horizon? There's a cyclone coming! The whole town's been evacuated - or has it? Can Stamp and Ace find Imogen in time?

The Seriously Extraordinary Diary of a Pig
Rating: 10.0

We were offered a copy of this book to review and I was keen to read it to Miss 6.5 as she loves books but hasn't really ventured into reading chapter books on her own yet. I almost didn't get to read this book with her though, as she took one look at the book and the appealing cover (with 2 cute little dogs) and took it away to read it by herself!

My understanding is that this book suits ages around 6 to 9 so with her being at the lower level of that scale, I wasn't sure how she would go, but waited to see... A while later she came back all excited having completed the first chapter - and she was raving over the book. However it transpired that maybe it was a little too hard for her to both read and understand on her own, so I ended up reading the book to her as I had first planned. We read it gradually over a week with a chapter or so a night, and it was a nice length with a few pictures scattered throughout.

As I read, I started to understand why it was a little hard for my daughter to understand on her own - it's written from the point of view of one of the dogs which took a bit of getting my head around, and I found myself reminding my daughter that it was the dog talking from time to time, just to help her understand the story.

There were lots of little puns throughout the book too - they would have gone way over my daughter's head if she'd been reading it on her own, but because I was able to emphasise them correctly she really cottoned on to them and would have a little giggle and inform me what they meant - they were very much at her level which was fun for her.

With a glossary at the end of each chapter and some interesting facts throughout, I felt that the book knew it was aiming slightly above some children's heads, but balanced this by explaining things as best as they could. This is great as I don't necessarily agree with dumbing things down just because it is for kids. I did find myself explaining many things as we read and so I felt it was a great way for my daughter to learn about all sorts of things related to storms and dogs in particular. Things such as the concept of storms having a name (Cyclone Julia), or about different breeds of dogs.

This is the 3rd book in the series and there were obviously characters that were introduced in the first books but it didn't matter at all that we hadn't read them.

Although my daughter really loved the book at first, and enjoyed the little jokes, I wonder if it would have been better read in a year or so. By the end of the book, she wasn't quite as enthused about the story as she was at the beginning and I am not sure she'd be keen on another Pup Patrol book just yet, but she does seem keen on trying some other chapter books. I would happily recommend this book to confident readers or if you enjoy reading with a younger child and explaining things as you go. And this book got my 6.5 year old more interested in chapter books which is a great plus for me. And it's a pretty good price for a decent length young-reader chapter book so it's worth giving a go.

My girls (5 and 6.5 years) love watching Paw Patrol on You Tube so I think they were expecting something very similar when I read them Pup Patrol's third book Storm Rescue. This was the first of the Pup Patrol books we had read and was nothing like the Paw Patrol even though the name is so similar. Thankfully they weren't too disappointed. We didn't feel we were missing anything by not having read the previous two books. The book consisted of ten chapters and they were short enough that we could read at least two chapters a night.

This is a fictional story told by one of the dogs Stamp. This seemed quite different to me but the kids didn't comment about it and I adjusted quickly to it. I liked that throughout there were valuable lessons for the reader about dogs. This included things such as being safe around dogs and why dogs behave like they do. There was also important lessons about storms and what to do if you are caught in one. It was a fun way for the kids to be taught these life saving skills.

The two main characters are Stamp and a puppy Ace. Stamp is responsible whereas Ace is often getting into trouble. He didn't mean to get into trouble but also didn't think about what he was doing. My girls really loved mischievous Ace. They could usually tell what was going to happen and would giggle. They were also grateful that he was safe in the end.

Overall I think this is a book that both entertains and informs. We all enjoyed it and would be keen to read some more Pup Patrol books.

When he was a boy, the magic of the Speck people - the strange dapple-skinned tribes of the frontier forests - claimed Nevare ... more...