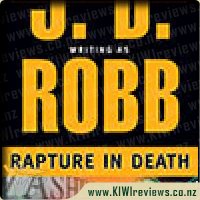 They died with smiles on their faces. Three apparent suicides: a brilliant engineer, an infamous lawyer, and a controversial politician. Three strangers with nothing in common--and no obvious reasons for killing themselves. Police lieutenant Eve Dallas found the deaths suspicious. And her instincts paid off when autopsies revealed small burns on the brains of the victims. Was it a genetic abnormality or a high-tech method of murder? Eve's investigation turned to the provocative world of virtual reality games--where the same techniques used to create joy and desire could also prompt the mind to become the weapon of its own destruction..

I read the book wondering why suicide would be of interest to a homicide detective but that was answered quite quickly. The thing that was scary is that you realise that someone is controlling people through a virtual reality game.

As usual Eve is on the right track but not completely on the right track. I was amazed at how the crook got the information needed for their plans and the method used for selecting victims. We don't learn much more about Eve's past but learn a tiny bit more about Roarke so there is potential to develop that story a bit more.

The thing that is really making me enjoy these books is that even though each book is part of a series each book can be read independently and not a whole lot of time passes between each book and each book has a different storyline, each focuses on a different way of killing people.

I am enjoying the books and are lucky enough to be able to read them in order, although the books are set in the future it is good to see that some things don't change and problems we face today are still an issue in the future. I'm really looking forward to reading the rest of these books.

The plot in this book was truly scary. Even the remote possibility of another person being able to control you, to alter your actions at their whim. Impossible? or not?

Roarke and Eve are enjoying a blissful escape on their off-planet honeymoon. Taking in all the sites and apparently all the different locations one can make love when just getting married. But like always, life just wouldn't be Eve's without the small interruption of death or murder. A minor set back of suicide Mars the end of their trip at the lush resort Olympus, in which Roarke is near completing.

But back on earth and back to reality, Eve is thrust into another crime scene. Suicide? or murder? Why are perfectly happy people killing themselves?

This books has some electrifying twists and turns, but most importantly has some revelations. In this book you FEEL the connections Roarke and Eve share. Go beyond that of a normal relationship, a normal bond that two people can share. Moments are heated, times are filled with fear, others desperation and yearning. But in the end, they have what they must in order to survive and pull through, each other.

This book wasn't as good as the first three, and there was one scene that seemed like it was only in there to create drama and tension for the sake of keeping the book going. Still, it didn't put me off the series.

Briar is a plant mage - he can distil medicines, grow a garden in a blink of an eye and persuade a tree to trap a criminal. Learning how to channel your power is vital. Briar's empathy with nature can heal - but it could kill just as easily.

Evvy is just a street rat. She doesn't even know she has stone magic, let alone how to control it - and she doesn't want to learn anything. Why should she care if people get hurt? None of them has ever cared about her...