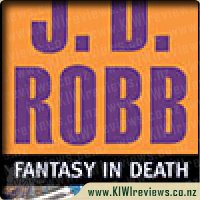 Bart Minnock, founder of the computer- gaming giant U-Play, enters his private playroom, and eagerly can't wait to lose himself in an imaginary world, to play the role of a sword-wielding warrior king, in his company's latest top-secret project, Fantastical.

The next morning, he is found in the same locked room, in a pool of blood, his head separated from his body. It is the most puzzling case Eve Dallas has ever faced, and it is not a game. . . .

NYPSD Lieutenant Eve Dallas is having as much trouble figuring out how Bart Minnock was murdered as who did the murdering. The victim's girlfriend seems sincerely grief-stricken, and his quirky-but-brilliant partners at U-Play appear equally shocked. No one seemed to have a problem with the enthusiastic, high-spirited millionaire. Of course, success can attract jealousy, and gaming, like any business, has its fierce rivalries and dirty tricks-as Eve's husband, Roarke, one of U- Play's competitors, knows well. But Minnock was not naive, and quite capable of fighting back in the real world as well as the virtual one.

Eve and her team are about to enter the next level of police work, in a world where fantasy is the ultimate seduction-and the price of defeat is death. . . .

In this book we have a man murdered whilst playing a game (for those who have seen Star Trek, think holodeck). The room sealed from the inside and no signs of tampering and yet somehow Bart Minnock has lost his head. Literally.

In Fantasy in Death Eve enters the world of gaming and geeks (Star Wars' Princess Leia in that gold bikini is still a big favourite for geeks) and has to figure out why someone would want Bart dead when there seems to be no one who had any real issue with him at all.

I really enjoyed this book, have actually just re-read it a week ago, and I think the reason that I really enjoyed it due to my enjoyment of Star Trek, the creation of the holodeck and the fact that this murder happened in a similar type of technology. Of course I would love for there to be holodecks one day, I don't want to end up like Bart.

This book also turns the table and has Roarke in more of a dire situation than Eve, but my only issue with that is it seemed quite rushed at the end when I think they could have added a bit more drama.

Garn once boasted five great kingdoms - until Ithrace was betrayed. Its royal family, the flame-haired Firemanes, was not saved even by its affinity with fire: every one of them was executed by the King of Sandura. Now, four kingdoms remain, out of balance and on the brink of war. But there are whispers that a newborn Ithraci heir may have been smuggled away... Terrified, ... more...