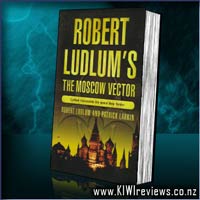 If geography's not your strong point - and it's never been mine - you may want a current atlas or Google maps handy. When Russia meant the U.S.S.R. it was easy - now Russia has lost all its state nations to independence, I found myself wishing I could check to verify details. Not that my failing distracted me from becoming as absorbed in this Covert One novel as with the Lazarus Vendetta.

The premise of the novel is the removal of significant western oriented agents and officials by a mysterious and rapidly acting fatal illness, based on a genetically tweaked smallpox bacteria, each vial produced being "personalised" to attack a specific individual, not viable within anyone else (ie, no pandemic of the dreaded disease). Throughout the plot's progress, more and more persons of political significance die.

Lt Col John Smith - the US President's Covert One project's leader - is sent to eastern Europe to follow up reports of disappearing people, files, and money from the countries formerly part of the USSR. As none of the former "Russian" nations trust the new Russia or each other, there is a delay in information sharing between intelligence services. As in the better crime drama works, the bad guys don't trust each other either.

While no one notices - or those who do are too complacent or deluded to take decisive action, Russian armed forces move to the borders to invade and take back the nations once part of USSR, relying on the lack of diligence or competence of intelligence gathering as agents are in short supply, so to speak.

Once again I found myself clutching a book I simply did not want to put down. Every spare minute had me reaching for it, as I kept it within easy reach wherever I went. Though I thought it had a somewhat familar theme-of-evil to The Lazarus Vendetta it was unique in so many other ways it didn't get stale, the way some serials do after a few titles. I think the collaboration of Ludlum, to keep the consistancy right, and Larkin, to provide fresh story elements and insights, has resulted in yet another top-notch title.

I particularly liked the whole technical aspect of the story, with insights into the moral and ethical elements of today's drive towards genertic engineering. In our failure to thus far create a clearly-defined form of electronic life, we are exploring the darker avenues of modifying the building blocks of organic life.

Stories like this bring to light the potential for abuse such a technology can allow, if placed in the control of powerful and ruthlessly immoral people... sadly, such as those who have risen to power by climbing the mountain of bodies of those under their control and supposed protection. The truely terrifying picture stories, such as this one, paint is all too real in parts of our world.

Overall, this is a great addition to the Covert-One series, well worth the purchase by any enthusiast of Ludlum's works, or spy-thriller genre in general.

Meet Dirty Bertie - a boy with nose-pickingly DISGUSTING HABITS! He's full to bursting with madcap plans and crazy ideas, and if it's TROUBLE you're after, look no further - Bertie's sure to be up to his neck in it!