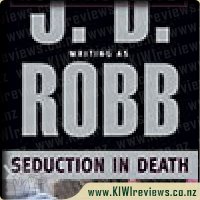 Dante had been courting his victim in cyberspace for weeks before meeting her in person. A few sips of wine and a few hours later, she was dead. The murder weapon: a rare, usually undetectable date-rape drug with a street value of a quarter million dollars. Detective Eve Dallas is playing and replaying the clues in her mind. The candlelight, the music, the rose petals strewn across the bed - a seduction meant for his benefit, not hers. He hadn't intended to kill her. But now that he has, he is left with only two choices: to either hole up in fear and guilt or start hunting again. . .

The book is slightly different from the others, but the story is still a page turning and really interesting. I remembered the relationship between Peabody and McNab more than a lot of other aspects of the story.

Stories like this make me more weary about things like Internet dating and how things have changed from the old way of meeting and dating people. It was a fresh approach and a good story. For once there were no flashbacks and crimes happened in other people's buildings so that was a good change.

I am looking forward to seeing which direction the story will go as there is so much that could happen. I would love to know the full story of Eve's past as a lot is still unknown about her but it would be great if Eve didn't have flashbacks all the time. The efforts of Trina and Mavis to get Eve to be more stylish can be rather funny to read and provides a few laughs.

Some books haven't really caught my attention but this one has and I am looking forward to the next book in the series as I know I have quite a few to read. I am really enjoying how the murderer is caught as with any crime the person always thinks they will never be caught.

As her first wedding anniversary approaches, Eve is finally beginning to find some security in her relationship with Roarke, even if she still feels she doesn't really understand it. She manages to admit some of her feelings for him out loud and the effect of that upon him is major. It's some great development for their relationship.

All the usual minor characters appear, with a delightful 'attack' on Eve by Mavis, Trina and Leonardo, determined to make her fashionable, more sniping between Eve and Sommerset, and interesting developments in the broken relationship between Peabody and McNab.

Robb takes a different approach with the murder this time, letting us in on the identity and motives of the murderer long before Eve begins to discover these things herself. This does't detract from the book at all and makes a nice change. We know exactly what is going on, but we still get to see the road Dallas takes to figure it all out.

But in the Yard there are two Clair Hills, and their very existence causes cracks that steadily ... more...