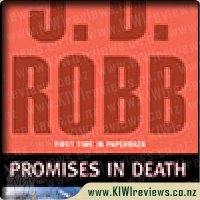 Amarylis Coltraine may have recently transferred to the New York City police force from Atlanta, but she's been a cop long enough to know how to defend herself against an assailant. When she's taken down just steps away from her apartment, killed with her own weapon, for Eve the victim isn't just one of us.
Dallas's friend Chief Medical Examiner Morris and Coltraine had started a serious relationship, and from all accounts the two were headed for a happy future together. But someone has put an end to all that. After breaking the news to Morris, Eve starts questioning everyone from Coltraine's squad, informants, and neighbours, while Eve's husband, Roarke, digs into computer data on Coltraine's life back in Atlanta. To their shock, they discover a connection between this case and their own painful, shadowy pasts.
The truth will need to be uncovered one layer at a time, starting with the box that arrives at Cop Central addressed to Eve containing Coltraine's guns, badge, and a note from her killer: You can have them back. Maybe someday soon, I?ll be sending yours to somebody else.
But Eve Dallas doesn't take too kindly to personal threats, and she is going to break this case, whatever it takes. And that's a promise.

Eve Dallas faces one of the toughest moments in her career. It's always a tough day when you have to contact a stranger and tell them that their son/daughter/wife/husband/friend etc. has died, but when you know the person, it makes the job that much harder. Chief Medical Examiner Morris has been in a relationship with the victim and Eve must knock on his door to deliver the devastating news.

Now comes the task of who wanted her dead and why. We have a character from one of the earlier books return in here, a killer, who has no issues about hurting others, and when Eve gets a treat on her life the stakes become that much higher.

This is another of my least favourite books. I understand the need to slow things down a little bit every now and again but I felt that this one went a little too slow. It's saving grace was the relationship between Eve and Morris, how they both cope with Coltraine's death and how much Eve is concerned about loosing Morris to his grief.

Go the F**k to Sleep is a bedtime book for parents who live in the real world, where a few snoozing kitties and cutesy rhymes don't always send a toddler sailing blissfully off to dreamland.

Profane, affectionate, and radically honest, California Book Award-winning author Adam Mansbach's verses perfectly capture the familiar-and unspoken-tribulations of putting your little angel down for the night. In the process, they open up a ... more...