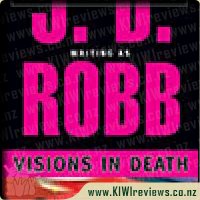 As more bodies turn up, each with the same defining scars, Eve is frantic for answers. Against her instincts, she accepts help from a psychic who offers one vision after another-each with shockingly accurate details of the murders. And when partner and friend Peabody is badly injured after escaping an attack, the stakes are raised. Are the eyes a symbol? A twisted religious ritual? A souvenir? With help from her husband, Roarke, Dallas must uncover the killer's motivation before another vision becomes another nightmare...

This is one of the books in the series that I don't enjoy as much as the others. The crime is pretty nasty (which isn't unusual), a woman has been raped, murdered, posed and her eyes removed. Dallas is very sceptical when a psychic comes to the station claiming to have seen the attack and wants to help.

I felt like this didn't flow as well as some of the other books, and I just didn't like any of the extra characters (well, as much as you can like the bad guy.) The one bit I did like about the book is when Peabody and Eve sit down for a chat and Eve tells her about what happened to her as a child, great relationship development there.

We also have Peabody in some major danger, which takes it off Eve for a change. It's great writing how Peobody's danger effects everyone, especially Eve who now realises how important Peabody has become to her.

I did find that there was a good, added twist to the book, but as an overall book I just didn't care about anything other than Eve and Peabody this time around.

Mr and Mrs Grinling are looking forward to an extra-special Christmas with their great-nephew, George.

But on Christmas Eve, Mr Grinling and George get stranded in the middle of a storm! Can Mrs Grinling reach them in time for Christmas dinner?