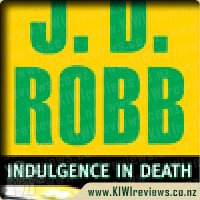 As time runs out on another innocent victim's life, Eve's investigation will take her into the rarefied circle that her husband, Roarke, travels in-and into the perverted heart of madness...

The book starts off with Roarke and Eve visiting his relatives in Ireland, which is nice to see that they have managed to create a bond with them, even though they are both still a bit cautious around children and Eve hates the countryside. Even on holiday though, Eve still finds murder, but this time doesn't need to get involved and it is off-set by a touching moment between her and Roarke.

Back in New York, Eve almost immediately catches the murder of a limo driver who was shot through the neck with a crossbow. A murder, apparently without a motive and most certainly not committed by the person who should have ordered the limo according to the records. When shortly afterwards a young and very successful prostitute is stabbed through her heart with a bayonet in a house of horrors, again without any clear motive and an innocent person having been used to hire the victim, it doesn't take long to link the two murders.

The only problem is that while we knew who the killers were from very early on, there wasn't a very interesting story about getting the evidence and then catching the killers, still a good and fun addition to the series.

Score: 9.8
Product reviews for listing 2697: The Shallows: How the Internet is Changing the Way We Think, Read and Remember -  Written by Nicholas Carr

In this ground-breaking and compelling book, Nicholas Carr argues that not since Gutenberg invented printing has humanity been exposed to such a mind-altering technology. The Shallows draws on the latest research to show that the Net is literally re-wiring our brains inducing only superficial understanding.

As a consequence there are profound changes in the way we live and communicate, remember and socialise - even in our very ... more...