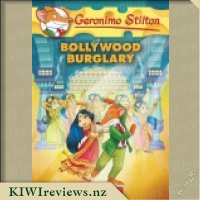 Disclosure StatementFULL DISCLOSURE: A number of units of this product have, at some time, been supplied to KIWIreviews by Scholastic (NZ) or their agents for the purposes of unbiased, independent reviews. No fee was accepted by KIWIreviews or the reviewers themselves - these are genuine, unpaid consumer reviews.
Available:
March 2017

My detective friend Hercule Poirat and I were headed to India. A Bollywood star we're friends with had received a valuable ruby and wanted us to help her protect it ... which meant that I ended up acting in the movie she was filming!

Rancid ricotta - I'm a terrible actor! Even worse, just when we least expected it, the ruby was stolen. Could we find the thief?

My boys love reading which is great as I think that reading is really important. They have discovered Geronimo Stilton and are rather determined to get, by any means necessary, all the books in the series.

I went to read the book for the review and I had to ask my boys where the book had vanished to as it wasn't with my other review goods. They were that excited about the book that they had put it with the other books we already have. I read this book in under an hour but I know it would take my boys a bit longer. I really like how there are explanations for the words that the reader might not know and how colourful and imaginative the illustrations are. I have gotten used to the different fonts and just read it as if the words were all just boring black but I know from listening to my boys discuss what they love about Geronimo is that the words aren't just boring black and that the good guy (Geronimo) and the bad guys are clear to see. Another good point for the book is that you can read this as a stand alone book as the story is complete so you don't have to read the books in a particular order and if you don't want to read the other books then this story still makes sense.

As usual this book engages the young reader and encourages them to learn while having fun and lets be honest that is the best way to learn things. The more I read of the Geronimo Stilton books, the more I realise how clever they are. Mr Seven is still addicted to the series but has now been joined by his sister so we take turns reading aloud so she can follow the story too. Although they are lots of fun and latch on to a child's imagination, they also contain educational material which the young reader absorbs without really trying.

In this book, the story is set in India - it unfolds against the backdrop of the Indian film industry and mock movie posters proclaim the wonderful adventures to be presented in the latest film. The book is every bit as colourful as a Bollywood production, enchanting children from all cultures with its bright, larger than life drawings and vibrant fonts.

But this is not just a creatively presented adventure story for young children. While reading, they are shown a full colour political map of the Indian sub-continent with an accompanying page of interesting facts - some of which were as new to me as they were to the children. Another two-page spread presents all the people who are charged with creating a film, from the hair stylist to the casting director to the props manager. I teach Drama myself so I was able to talk at length about the roles these people play. It is interesting to watch a child's reaction when he learns that the actors are not the only important people in a film company.

Miss Five loved the chapter entitled "Cream for the Calluses" because it described a situation where everything went wrong, and poor Geronimo ended up washing himself with toothpaste and brushing his teeth with shampoo. She made a similar mistake not so long ago herself so it was good to know that she was not the only one to get her toiletries mixed up.

Some of the film scenes were shot in sites that are famous all over the world - Agra (home of the Taj Mahal), Varanasi (on the banks of the Ganges), and several others. Each of these sites was depicted in a clever line drawing which was finished in muted shades rather than the explosive colours of the rest of the book. I thought this was a nice touch, and Mr Seven said he thought the colours had changed because they were "old places". I think he meant "historic places", but his comment did show that he had been aware of the difference in style on these pages.

Our reading session ended the same way that it always does, with Mr Seven taking himself off to bed, book in hand, ready to re-read it on his own! We are all looking forward to the next in the series!

In this charming second-person narrative, our little boy hero imparts his infinite knowledge of how to dress a dragon, a task that isn't quite as easy as it may seem. With helpful hints like 'You may have to tickle-tackle him to the floor and give him belly kisses' and warnings like 'Dragons do not like shirts. But they do like capes!', this story is not only delightfully entertaining, but extremely endearing.