« Spacemice #2: You're Mine, Captain! review 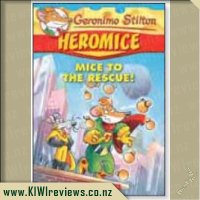 The big book of everything for boys
Rating: 9.5

My son loves Geronimo Stilton so we were very excited to see yet another spinoff from the popular Geronimo Stilton series. We've had Cavemice, Spacemice and even Geronimo's sister, Thea, has her own series - now we're entering the realm of Heromice. Superheroes seem to be a big thing with kids these days and never really go out of fashion so I knew this book was going to be a winner. It's not just a book for boys either, there are a number of strong female characters in this book which was nice to see.

This book is a refreshing take on Geronimo Stilton and is based in a completely different city with only a couple of original characters - Geronimo and his buddy Hercule Poirat. Geronimo is his usual scaredy cat self which is where the majority of humour comes from but despite this, he still somehow manages to save the day. I liked the fact that Geronimo's superpowers weren't predetermined at the start of the book (he lost the manual for his supersuit) which made for lots of surprises in the events that followed. My son also pointed out that even though the Heromice managed to stop the bad guys plans this time, they didn't catch the bad guys themselves, so you can kind of see where the series is headed. There is also a touch of romance which my son thought was gross (he's at that age) - it's nothing over the top but Geronimo Stilton has a bit of a crush on the female Heromouse who comes to their rescue.

Overall it was an exciting and action packed read - great for both boys and girls. We can't wait for the next book in the series.

I decided to give this book a go recently because it is a new spin off series from the very popular Geronimo Stilton series. Stilton has several spin off series going, including Thea Stilton and Creepula. Cavemice started about 5 books ago and there have been two Spacemice books recently. All these spin offs have been interesting, but they are often just taking the same characters and putting them in a different situation. I wanted to see what they would do with Heromice.

When I started to read this one, it immediately introduced Geronimo SuperStilton and his partner in Heromice work, Hercule. These are two characters that we know well. But then the rest of the cast of Muskrat City were introduced and I didn't see any other characters from the other series. This was really refreshing. Geronimo was his normal scaredy mouse self, and Hercule was his normal brave to the point of silly self. Aside from that, we had some really clever bad guys, and some really clever mouselets helping the Heromice too.

As a mum to girls, I really appreciated the strong female characters too. The Stilton books are always good for this. Every book has strong, smart and interesting girls that Stilton falls all over himself to be with. In this book, there is one beautiful mouse he falls for, but there is also a female mouselet who is part of the brain trust that help the Heromice. And there is a lady mouse in charge of the Heromice team too.

We have been reading this all week and every night I would walk in and say "two chapters only" and find myself reading 5 or 6 because I wanted to. I wanted to see what would happen next. I usually get a bit Stilton fatigued, but with this tale I really didn't experience that at all. And we giggled so much, especially regarding the super powers. Superstilton's power is quite silly, but fun. If this series continues in the same vein, with new characters and more of the mouselets and Tess I will happily read these ones. I am excited to see what else these Heromice can do.

With this first picture book in Russell Brand's Trickster Tales series, the famed comedian, actor, and bestselling author delivers a hilarious retelling of an old fairytale favorite that will appeal to adults and children alike.

Once upon a time, long ago, in a time that seemed, to those present, exactly like now except their teeth weren't so clean and more things were wooden, there was a town called Hamelin. The people of ... more...