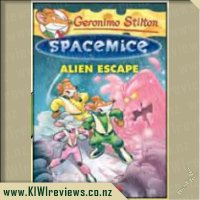 Geronimo Stiltonix's spaceship is in danger of exploding! The only solution is to replace the engine's batteries by tracking down a rare element.

When a group of mysterious aliens claim they can help, Geronimo is relieved. But are the aliens as friendly as they seem?

Miss 7 is a big fan of Geronimo Stilton. We have read many, many of the books as well as several of the other spin off books. Cave Mice, Creepula, Thea's series to name a few. This was the first book in the new Spacemice series.

Like the Cavemice series, and the original series all the same characters are there. You have Geronimo, Thea, Benjamin, Trap and other main cast members. But unlike where the Cavemice are ancestors of the original Geronimo, Spacemice are like Geronimo's descendents. Much of the futuristic stuff is robots and space arks and the like. But the thing that probably annoyed me was the way everything ended in -x. It just made reading aloud a bit difficult so I ended up re-naming a few things for ease of reading.

My daughter and I did really enjoy the story in this book. There was plenty of mystery and intrigue. I enjoyed watching my daughter work out what was happening. She even pretended to be the antagonist a few times while we read the book and I enjoyed our discussion on alien life and what the future might be like. There were a couple of times when the story got a little scary too.

In the end, the way the situation was resolved was quite brilliant. It showed some real lateral thinking, which I appreciated. The illustrations in the book were looked at a lot more than normal Geronimo as well. She was really fascinated by the alien and the other planet visited. It will be interesting to see how Stiltonix develops over time.

My son is a big fan of Geronimo Stilton so we were really excited to see that there was a new spin off series. This time we are off on a space adventure with Geronimo Stiltonix and his family as they travel the galaxies, meeting crazy aliens and having some out of this world adventures.

This book will really appeal to any young fantasy lovers with the inclusion of different planets and aliens as well as various robots, gadgets and gizmos. The story is fast paced, action packed and has its fair share of comical moments - it was a big hit with my son judging by the constant pleas for "just one more chapter".
I loved all the detailed illustrations and the little boxes of extra information telling us about the different characters. The chapters were a decent length and we finished the book over a couple of nights. I also liked the differing fonts on each page but my son (6.5 years) struggled to make sense of some of the words because of it, when reading it himself.

This book definitely appealed to my boy as he loves space and monsters/aliens and it's one that we'll read over and over again - we can't wait for the next book in the series.

Score: 9.8
Product reviews for listing 8222: Swimming Against the Storm -  Written by: Jess Butterworth

Our land is sinking. It's disappearing into the water. And no one knows how to save it. Twelve-year-old Eliza and her sister Avery have lived their entire lives in a small fishing village on the coast of Louisiana, growing up alongside turtles, pelicans and porpoises. But now, with sea levels rising, their home is at risk of being swept away.

Determined to save the land, Eliza and her younger sister Avery secretly go searching in ... more...