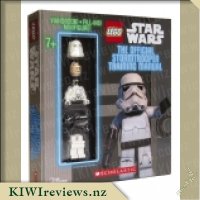 Do you like adventure and excitement? Ever dream of exploring a galaxy far, far away? Would you like to capture rebel scum? Then this stormtrooper manual is for you! Explore the far reaches of the Empire with this advanced guide to the galaxy, and then test your skills in the activity book to see if you have what it takes to join the stormtroopers!

Included in your training manual are a guide book, an activity book, and a Stormtrooper miniature, all enclosed in a sturdy case with magnetic closure.

I have never really been hugely into star wars myself but having a 5 year old boy I have had to adopt an interest as he loves Star Wars and in particular star wars lego. He has been playing with lego for a few years now so I have had to take on challenges that I would not normally find particularly easy as lego has always been a bit of a challenge. I was keen to review this book with him as it seemed like a lego star wars activity we could do together and I could learn some new star wars facts.

The day it arrived was the same day he went into hospital for surgery to have adenoids removed and grommets put in so it was a bit of a battle to get him to leave the book at home while we went to hospital. I am actually glad that I let him bring it with us as a 5 hour wait was not much fun for a little guy or mums nerves as we waited for his surgery time. The book had so much stuff to keep us entertained and busy.

The most appealing thing for him was the build your own lego stormtrooper figure that came with the book and he wanted to do this first. Lego minifigures are probably his favourite and he collects them and puts them together himself easily. This stormtrooper we found a little more difficult but we did get it together as a team effort we just weren't particularls sure where the small piece of white felt went and how you would get it on as the stormtroopers cape. We tried a few different ways and ended up just improvising but it didn't look completely right in my opinion.

Not having an instruction made this a little bit more difficult and although we looked at as many pictures of the lego stormtrooper inside the actual book we still could not decide if we were correct with the way we had positioned it. The book itself has a lot to offer it is packaged in a slip case with two seperate books one of which is the stormtrooper manual where we learnt a lot about what a stormtrooper is and what it would take to be a stormtrooper and a activity book with lots of cool acitivites.

Although perhaps aimed at children slightly older than my 5 year old we still managed to get a lot of enjoyment out of it as he was able to do the puzzles and activities and it gave me a different format of book to read to him a little different to our usual picture book. Having stories every night at bedtime he does like a bit of variety so the formal aspect of a stormtrooper manual was appealing to him and we could read it together and look at the pictures and learn new things. Mr Seven was delighted when I asked him if he would help me review this product. The LEGO miniature packaged in the cover caught his eye immediately, and he wanted to make it straight away. I thought that was a good choice as he is a confirmed LEGO fan so we unpacked it and he got to work while I checked out the cover design.

I was impressed by the sturdy appearance of the product. It looks like a book but has reinforced covers which are closed by magnetic strips inside the outer wrap, and which open out to display the contents. When not in use it can stand on a bookshelf alongside conventional books, a fact which is bound to increase its life expectancy among young children! Inside, there are two separate booklets - an activity book with fun puzzles and facts, and a "training manual" containing everything you ever need to know about Star Wars Stormtroopers. The pictures are attractively presented on high quality paper and include plenty of detail.

While I was checking out the format, Mr Seven was still trying to assemble the model. I was surprised that it was taking him so long as he is usually very quick at putting various LEGO pieces together, and the label stated clearly that it was designed for children seven years and over. He was getting frustrated and finally asked his father to assist. And to our surprise, Dad found it equally difficult. None of the pictures in the book was an exact match, and there was no instruction page included. After half an hour they had managed to put the figure together but there was still one piece left over - and none of us could work out exactly what it was or where it should go!

Mr Seven then settled down to read through the manual and try a couple of the activities. He found this part much easier - he enjoys reading and the words did not present a challenge in the same way as the model making had. He even tried out some of the riddles on us.

We decided that the product was good value overall, but all agreed that the inclusion of an instruction sheet would have improved it considerably. Mr Seven was disappointed that it took him so long to put the model together and his comment was that it might discourage other children from having a go. That would be a shame as the rest of the package is great.

The Afterlife is only the beginning!

The world is not the way it was. The dead have risen and constantly attack the living. The powerful Church of Real Truth, in charge since the government fell, has sworn to reimburse citizens being harassed by the deceased. Consequently, there are many false claims of hauntings from those hoping to profit.