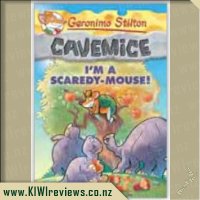 Disclosure StatementFULL DISCLOSURE: A number of units of this product have, at some time, been supplied to KIWIreviews by Scholastic (NZ) or their agents for the purposes of unbiased, independent reviews. No fee was accepted by KIWIreviews or the reviewers themselves - these are genuine, unpaid consumer reviews.
Available:
May 2015

Geronimo Stiltonoot and his family save a young dinosaur from the river. The dinosaur and Benjamin quickly become good friends. But the dino turns out to have a tremendous talent for mischief. Can Geronimo get him back to his herd before he causes a megalithic disaster?

) didn't exist at the same time as dinosaurs he still enjoys a good story involving the two since he likes to roleplay someone hanging out with the dinosaurs. The main dinosaur in this story was made up but I loved that it has a small bit where it gives us a species and also if it is a herbivore, carnivore or omnivore. The characters are all prehistoric versions of the characters from the other book in this series so there isn't anyone new to learn about.

I love the illustrations in this book, they are fun and lively and really brighten up the book. The last few pages of the book have a picture of the coves of all the books to date which I think is a great way to let the kids tick off what they already have. There is also a map of the cave mice's village so it was fun to look at it. The whole book is bright and inviting, the kids have tried to sneak away with it a few times so I know they'll be happy to finally put it in their room.

Another fabumouse book in the Stilton series.

Since my daughter is currently on a strong dinosaur kick and is already a big Geronimo fan, it was quite easy to get her interested in this book. The cover of the book shows Geronimo Stiltonoot (Stilton's ancestor) up a tree surrounded by large purple dinosaurs. He certainly looks pretty scared on the cover and the book seems to be largely about being scared.

As we opened the book, I read the title and my daughter agreed that he is always a scaredy-mouse. While this book is about an ancestor, it's essentially all the same beloved Stilton characters in the stone age. So it's easy to think of him as one in the same. He is a coward and he doesn't pretend anything else, but he still digs deep and goes on those adventures just the same as his present day version.

In this book, the mice find a baby dinosaur and have an adventure trying to put things right. There is a subplot as well, which ties nicely in with the rest of the story. Although the title is about being a scaredy-mouse, I found that he wasn't as cowardly in this book as others we have read. I think, because he felt more comfortable in the situations he was in. He certainly had some nervous moments though as well. Plenty of giggles had by us, especially at one high-flying moment.

The only thing that I found a bit hard was that although most of the dinosaurs mentioned in the text were real ones, the main encounter is with what seems to be a made-up dinosaur type. My daughter was keen to learn more about them, so I told her I couldn't find any resources about it. However they look to be a type of sauropod so we were able to look into those. This satisfied her. The Cavemice series is kind of like the Flintstones in terms of the way dinosaurs and mice interact with each other.

The illustrations in this one were really neat. There are a couple of double page pictures that really help you see the dinosaurs and the area they are in. When the action got exciting, my daughter was very keen to see what was going on, and these books don't disappoint. They are word heavy, but the chapters are short and there are lots of pictures too.

Purity in Death finds our heroine on an assignment that leaves her even more tormented by the past. When a deadly computer virus is unleashed on society's undesirables (namely, child abusers), it's up to Eve -- along with her astonishingly handsome husband, Roarke; her feisty aide, Peabody; e-geek McNab; and her mentor, Captain Feeney -- to discover the origins of the virus and shut down the clandestine vigilante group that created it ... more...