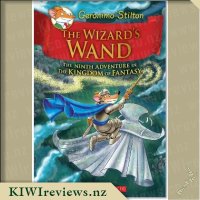 The Kingdom of Fantasy was my son's first introduction to chapter books and we've been following the series ever since. I am an avid reader of the fantasy genre and I love that I can share my passion with my son through age appropriate books. This is the ninth book in the series and Geronimo finds himself back in the Kingdom of Fantasy, once again on a journey to save Queen Blossom and the Kingdom itself.

To be honest the story is starting to become a bit repetitive. Most of the books follow the same premise of save Blossom, save the Kingdom. However, there are always new bad guys, new friends to be made and new parts of the Kingdom to discover which helps keep Geronimo's adventure fresh even though the purpose of his mission doesn't change much. The book is fast paced and action packed. My son also found this volume to be particularly humorous with the addition of a tooting invisible cloak.

There are lots of bright illustrations throughout and some pages where you are required to find a certain number of objects or translate something that is written in the Fantasian alphabet. The use of differing fonts and text sizes to emphasise different words or phrases also adds interest to each page. While I think this is good for younger readers, it can be difficult for independent readers to decipher some of the words.

My son loves these books now just as much as he did 2 years ago and despite a little bit of repetitiveness we can't wait to find out what further adventures await our unlikely hero in the Kingdom of Fantasy.

The Wizard's Wand is another installment in Geronimo Stilton's adventures in the Kingdom of Fantasy. This is a hardcover book and it is much longer than your normal Geronimo novel. It's illustrations are also a step up from the novels. You get a lot more full colour double spreads of the scenes. You also get maps to every new castle or keep that Geronimo visits.

I read this to Miss 9 over the course of two weeks. It would have been a bit quicker, but I stuck to two to four chapters a night. The chapters are relatively short which is good for younger readers as well. My daughter gets tired reading, so it makes a chapter a bit easier to knock off. We loved the beautiful scenes and the new creatures that we met. Her favourites were the spiders and the snakes.

Geronimo has a defining moment in this story, where he learns a valuable lesson. It was a bit out of character for him, as he is usually a scaredy mouse. It seems that he is under the control of something which causes him to act differently. It was an interesting twist to the normal flow of his stories. There's a great moral at the end as well.

There is the normal funny slapstick running through the story. In this one, he got a stinky new friend which caused a lot of on-going giggling each night. There are also some puzzle pages, and code deciphering to do. So it's a cool interactive story, much like the others in this series. This would be a great Christmas gift or start of summer holidays gift for a confident new reader. Anyone who loves Geronimo will love this new adventure too.

Tulip was famous in her neighbourhood for two reasons. She was a fearless adventurer, and she went everywhere with a seriously strange sidekick - a potato called Doug!

Tulip and Doug were inseparable until catastrophe struck and Tulip lost her best spuddy buddy. She was inconsolable until she made a new friend. A boy who had a pet rock called Susan!

This heart-warming tale shows that friendship comes in all shapes and sizes.