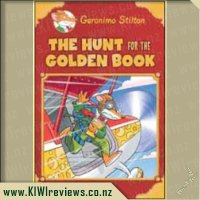 Geronimo Stilton - The Hunt for the Golden Book product reviews

Grandfather William was throwing me, Geronimo Stilton, a party - it had been 10 years since I published my first book. He wanted me to write a new book especially for the occasion. Then my laptop was stolen right from under my snout.

Cheese niblets, how terrible. Could my friends and I find my computer and print my book all in time for the party?

I have only recently started reading this series so not that familiar with the characters and the whole history of the characters but that didn't stop me from enjoying the book although I was finding the grandfather really annoying and very demanding, I really didn't like him at all and in the bonus book he was equally irritating.

I managed to read both stories in a few hours. The chapters are short and action packed and the illustrations were fabulous. I had a small amount of trouble getting used to the colourful and different fonts. I enjoyed the bonus book mainly due to the hints and the colourful pictures and it was easy to figure out what had happened but they did spell it out in the end for those who missed the clues.

There were some really silly jokes at the end, I know if I let the kids read it then I will be hearing them for months to come. The cover looked really good and sparkly but I did remove it so that I could read it in comfort as I don't like the feeling that something is moving around when I'm reading (I do it for all the books that have lose jackets like this one does) but that is only a minor inconvenience.

I know this series is looking promising so I'm looking forward to reading the rest of the books and some of the earlier books.

This book celebrates 10 years of Geronimo Stilton and is a real treat for any Geronimo Stilton fan. There's not just one but two stories as well as some fun jokes at the back that my son has to look at every single time. It's beautifully illustrated and the hard cover and gold accents on the dust jacket make it look a bit special.

I think The Hunt for the Golden Book is better suited for older children aged 8+. My son (age 6.5 years) found it hard to get into and the story wasn't as outrageous or action packed compared to other Geronimo Stilton books that we've read. There was also a romantic component and I'm sure I'm not alone when I say that my son finds anything lovey dovey to be gross.

The second story is one of Geronimo's Mini Mysteries which my son absolutely loves. He loves playing detective and the book is full of clues to draw you in and help you solve the mystery. It's really awesome when a book engages my son on such a level that he doesn't want me to stop reading.

With two books in one it's pretty good value for money and one that all big and little Geronimo fans should have in their collection.

We have been reading this book this week. It's the 10th anniversary celebration book for Geronimo Stilton. It's hard to believe that it's been going for 10 years, but then again - there are so many of the books I haven't read. Plus there are all the spin off series as well - Thea, Creepala, Cave Mice, the Fantasy Kingdom books and now Stilton in Space too.

This book is well presented in hard cover. It has a nice book jacket to it, and the cover is glossy underneath. In true Geronimo style there are so nice illustrations of both Gerry and holy cheese on the cover.

Inside there is two books plus a few pages of very cheesy jokes. The main story is all about getting ready for the 10 year anniversary and writing this golden book. I felt very sorry for Geronimo during that whole saga. He spent most of it tired or hungry and stressed out with trying to write, losing his computer and being yelled at. But the end was good and the celebration despite all the drama was really neat.

This was followed by a really classic Geronimo mystery story with clues and everything. We love the stories like this, because we get to stop and think about who might be the baddy. I figured it all out pretty fast, but it was fun watching it all unravel. Lastly the jokes were really terrible, but kids are going to love them. I read each one out and every time my daughter rolled on the floor laughing so much she was in tears.

This book would be an essential for any Stilton fan. It's got everything, two stories in two slightly different but still totally Stilton representations. The jokes add to the fun, and it's hardback too. $21 is pretty good pricing, as the little paperbacks go for $10 each I think. Plus it's a bit of a collectors addition. It was a great school holiday read.

The once shadowy activities of special forces have grown into an increasingly exposed element of 21st century warfare and anti-terrorist activity. Here, in one giant unputdownable volume, are 40 of the most dangerous special operations ... more...