« How To Hide A Lion At School review 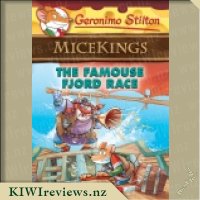 It's the day of the Famouse Fjord Race, a miceking sailing competition. Geronimo Stiltonord isn't competing, since he gets seasick . . . but then he's dragged into a boat! Just when he thinks things can't get worse, the terrible vilekings appear - and so do the evil dragons. Squeak! Will his team stay afloat?

There is never a dull moment with Geronimo and this book is no exception - it's fast paced, action packed and humorous (provided by Geronimo's scaredy cat nature). There are lots of bold and colourful illustrations as well as differing texts and font sizes to add interest to each page - particularly useful for young readers and highlighting different sounds and feelings. The chapters are a good length (not too long and not too short) and we completed this book over a couple of nights. There are also information panels provided for many of the new characters which are very insightful.

My son loves the dragons in this series and he particularly loves their sibilant tongue which he just has to read himself to get the required emphasis on the 'sssss'. The information panels for each new character are also very helpful. We are looking forward to seeing where the next book will take us. Mr Eight was visiting when I took this book out of my bag so I could review it, so he promptly offered to help me. I thought he would be a little old for Geronimo Stilton, but he assured me that he had already read several of the books in the series and enjoyed them, so I accepted his offer without further protest! I had already read it through twice so I asked if he preferred to read it himself or have it read to him. He gave me the sort of withering look that only a nine year old can and assured me that he was quite able to read it on his own, thank you!

While he was reading, I took the opportunity to write down a few of my own impressions so I could compare my own ideas with his once he had finished. I thought I would have plenty of time for this but he is a fast reader and had finished the book in just under an hour. He had dissolved into giggles several times while reading but was so engrossed I did not have the desire to interrupt him. Closing the book, he announced that he had enjoyed it because it was funny, and he would be interested in reading the next book in the series to find out what happens to Geronimo Stiltonord when he attempts Sven the Shouter's next challenge.

Mr Eight and I were both interested in the format of the book. In addition to the usual story and illustrations, there are several words on each page which are formatted as word art in varying colours and fonts. For me, this was slightly annoying as it tended to slow down the reading process, but Mr Eight disagreed. He said that the highlighted words helped him to focus on what each page was telling him, and sometimes they actually reflected the content as when the word "red" appeared in a red font, or "faster" appeared in italics, first in lower case and then in upper. This made it appear as if the words themselves were speeding up.

He also commented on the various "information" panels which appear whenever a new character is introduced or new words like "port" and "starboard" are included. This is great for a young reader as it adds information without stopping the flow of the story. Mr Eight said he had learned several new nautical terms. He was also prompted to look up the word "drekar" and discovered it is an old Norse word meaning a dragon, but it also means a dragon boat. I liked the way he was stimulated to go beyond the book itself to explore new ideas. Most impressive!

Sage and her parents visit a bakery to film a segment for their TV show. They are in for a surprise when a treasured ring goes missing.