The Yeti Files: Monsters on the Run review 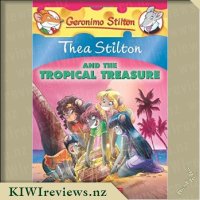 While the Thea Sisters are on a tropical vacation in the Bahamas, they stumble upon an old pirate map! It's related to a local legend. Could it lead to treasure?! The five mice venture onto the sparkling Caribbean Sea to follow the map... but someone else is trying to find the treasure first. It's a dazzling adventure!

My 10 year old daughter really loves the Geronimo & Thea Stilton series of books so she was really excited to receive this Thea Stilton Tropical Treasure book to read and review. She quickly read the book over two nights and she eagerly explained the plot and the characters to me. I especially liked listening to her explanation, because as she has grown so has her comprehension of stories, morals and themes.

Tropical Treasure tells of the excitement of Thea's 'sisters' winning a trip to the Bahamas to help a professor in his wildlife centre caring for the island's birds. Once there, they were dismayed to learn that the centre was in danger of closing, so after learning of an old tale of hidden treasure they set out to locate the treasure with a old map they stumble upon.

The themes of this book include romance, friendship, forgiveness and unity. My daughter loved the way the girls worked together to try and solve the mystery and supported one another throughout the book, while accepting their flaws and personalities. What a great thing for my daughter to identify and most of all think was really cool! I would recommend this book to all children from approx. 5-12 who enjoy a fast paced book and with an added bonus of great learning outcomes for readers.

Thea Stilton and the Tropical Treasure was the book Mr Six chose out of a selection of Geromino Stilton books. It goes to show that the Thea Stilton books are for the boys as well as the girls. So, my advice is to let the books speak for themselves and make no assumptions about which the boys or girls will like!

Packed with the usual fun and adventure found in this series of titles, this book was a delight to read and share with Mr Six. Early on in the book, there are some messages about friendship, education and care of the flamingo on the island they are visiting. This turns into a faster paced and fun journey to find the treasure. Along the way, the friends have to look after each other and follow clues. I liked the way the book shows that sometimes people make the wrong choices and that friends should still watch out for each other regardless of this. One of the characters learned a lesson when she made that wrong choice and then needed her friends to save her. Love is another theme in the book. You will need to read the book to find out if two shy mice manage to let each other know their feelings!

The illustrations are consistent with those in the rest of the Stilton books. As we read the book, we had to take plenty of time to enjoy the illustrations as well as the text. Although Mr Six is now able to read these books by himself, he loves having them read to him and he likes to look at the pictures while he listens to the story being read. We have become very familiar with the characters and somewhere along the line they seem to have become more like humans than like mice. The characters are fun and engaging.

Now that Mr Six has been exposed to Geronimo Stilton and Thea Stilton books for a while, he is starting to make comments on the way the books are set up. He enjoyed the "juicy" words in the book and the variation of the colour and font of the text. As a parent and teacher, I like this as well as it provides extra interest to the children as they read the books. As I read the book, Mr Six kept stopping me to let me know that there are some really good words in the book. He loved picking out the interesting words in the text and trying to read them.

The inclusion of a pirate map and the possibility of pirate treasure in the story is bound to excite readers of this book. It blends the ideas of reality with imagination and local legend. This combination really appeals to Mr Six. He also enjoyed the interaction between the characters that he has become so familiar from reading other books in the series. I know that he will be back for more Thea Stilton books in the future!

Accused of medical malpractice, Dr Craig Bowman feels shocked, angry and humiliated. He has spent gruelling years in the service of others before eventually becoming partner in an exclusive medical practice which allows him to lavish personal attention on just a small number of clients. But this idyllic situation grinds to a halt one sunny afternoon... and things are about to get much worse.