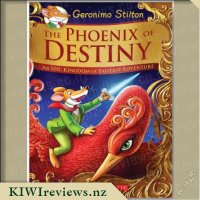 I, Geronimo Stilton, had returned to the Kingdom of Fantasy on the wings of the Phoenix of Destiny. Blossom, Queen of the Fairies, needed my help once again. But Blossom was behaving strangely. She sent me off on quest after magical quest, each one more bizarre and dangerous than the last.

It felt like my missions were building up to something truly terrible right under my snout. Could my friend and I put things right again? It's a story full of twists and turns, mazes and puzzles, and tones of fantastical creatures.

We love Geronimo Stilton and the Kingdom of Fantasy series was my son's first introduction into the world of chapter books so I was super excited to receive this book to review. When I got my first look at it, I just couldn't get over how pretty it is - the gold edging on the pages and gilt cover makes it look really special.

The book is essentially made up of a series of quests that Geronimo undertakes in order to please Queen Blossom (or so he thinks).

I felt like the pacing was a bit rushed and each quest doesn't go into much depth so there's no real character development or feeling that he might fail his mission. There are a few familiar faces from Geronimo's earlier adventures into the Kingdom of Fantasy that put in a brief appearance which was nice.

The book is written in typical Geronimo style. The differing fonts/texts while adding interest for younger readers can be a bit distracting for independent readers and my son had a few issues deciphering some of the words. The Fantasian alphabet is the written language of the Kingdom of Fantasy and it's always fun deciphering it. I also loved the inclusion of mazes in this book as well as all the other extras - find/search pages, riddles, jokes, even recipes. There are lots of detailed colour illustrations including maps of the different areas that Geronimo visits and excerpts from the Legendarium (the ultimate guide to the Kingdom of Fantasy). It is a large book but the chapters are on the short side which I like as it breaks the story up into more manageable chunks for independent readers.

You can certainly tell that a lot of work has gone into creating this book and it looks and feels very special. My son loved it and we'll definitely be reading it again and again with something new to see each time.

Reading through this latest Kingdom of Fantasy book in the Geronimo Stilton family of books took us a wee bit longer than it usually does. This was partially because the book was a bit thicker than they usually are, and partially because Miss 3 insisted on being a part of the storytime for this one.

As far as Miss 8 was concerned, this book ticked all the boxes for her. She had recently come home from school with a book about mystical creatures, so revisiting the Kingdom of Fantasy and all the wonderful magical creatures there was perfect. We read about the phoenix and then read through Geronimo's encounter with one. We had discussed vampires and bats and shape shifting and again, encountered beasts and characters in this adventure that had similar traits. I must admit I was right into that stuff at her age too.

For Miss 3, it was the games and puzzles that really caught her imagination. She was happy to sit and pour over the two page spreads where she had to find hidden items. She was a pro at that activity, even when I thought it would be quite tricky. Not only that, but at one point I listened as she perfectly counted to 14, counting bats. It was a great thing to share with her. The mazes were a bit trickier, but they both loved tracing the paths through the maze with their fingers.

Some of the pages are wordless or nearly wordless too, allowing you to take in some of the stunning artwork in this book. Its bright, and magical and there is heaps of excellent detail on the creatures and landscapes of the Kingdom. I especially liked the pages introducing one of the dragons. Miss 3 gave a little ohh and ahh as each page revealed him. Aside from that, there is a mystery to solve. There are multiple quests so this really is a hugely epic adventure. Poor Geronimo doesn't get a moment to rest.

If that doesn't get you interested in buying this one, there are also recipes. I can not wait to try making some of Geronimo's cookies. They sound really good. The soup recipe also sounded pretty good too and healthy. There are even riddles and some pretty corny jokes. This is a thick book, it's hard cover and the pages have that gold edging. If you like Geronimo books, or have been following the Kingdom of Fantasy series, then this one definitely needs to join your collection. But even if you haven't been reading the series, it is pretty stand alone. Geronimo tells you about anything you might need to know as you travel with him.

Jake is not a bad person - he used to have 'potential'. But now he's been expelled from five schools and only Cattle Rise, a tough inner-city school, will take him.

Here survival means keeping his head down and that's not something Jake's very good at. Then he meets Robin, a girl with problems that are bigger and more serious than Jake can even imagine. Helping Robin means entering a dangerous, violent world.

It also might mean remembering why life is worth a second chance.