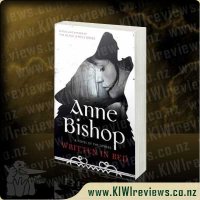 Meg Corbyn is on the run. Alone and desperate, and ill-equipped to deal with the real world after a lifetime of imprisonment, Meg stumbles into Lakeside Courtyard, where the Others reside. Meg knows entering a courtyard is a dangerous risk - most people who tangle with the Others end up dead - but it's the only place she'll be safe from the people chasing her. For Simon Wolfgard, leader of the Others residing in Lakeside, Meg is a puzzle until he discovers she's a valuable blood prophet and can see the future. Then he has to decide if she is worth the potential fight to keep her in the Courtyard.

It will be a fight not just with the humans but with the rest of the Others - as well as a fight with his own confusing feelings towards Meg. For Police Office Montgomery, Meg is the property he's supposed to recover - and the spark that could start a fight with the Others that would wipe out the human city of Lakeside. And for Meg, who has seen her own future, living in the Courtyard is a chance to have a life - for what little time she has left.

I am a huge Anne Bishop fan, so I was super excited to finally read her latest novel. I was not disappointed, it was one of those books that I found extremely difficult to put down. The story is unique, the characters are engaging and while it wasn't overally action packed until near the end, there was enough going on to keep me intrigued. The story follows Meg, the run away blood prophet, as she adjusts to life inside the courtyard and dealing with the terra indigene (shifters, vampires, elementals) that live there.

Because of her forced captivity she doesn't have any experience of the outside world, everything that she knows comes from training images and videos. She starts off as a pretty weak character but continues to grow throughout the story as she makes friends, gains independence and grows in confidence. Meg is like a breath of fresh air in the courtyard and is the catalyst for change in the terra indigene who gather around her and count her as one of their own. There are quite a few different characters, human and Other, all beautifully written and with their own parts to play.

I must admit that the book wasn't as dark as I thought it was going to be considering the nature of the world and most of the characters. There were also parts that I found quite humorous (in particular some of Meg's dealings with the terra indigene) which served to make some of the non-human characters more likeable.