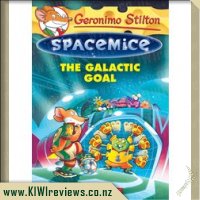 The spacemice have received an invitation to participate in the intergalactic soccerix championship. It's a tournament for the most popular sport in space! But Geronimo doesn't even know how to play soccerix, let alone lead a team to victory against aliens with bizarre skills (like flying)! Can the spacemice team prevail?

My 9 year old daughter is a big fan of the Stilton books, so we jumped at the chance to review the a book from the Spacemice range. She was very excited to actually hold the book and admire all the artwork both on the cover and inside; every book has such detail in the illustrations and we especially like the characters page at the start of the book so you can easily picture all of them as you read the book.

My daughter and I took turns reading this book out loud chapter by chapter, this was a great way to read this book, because words such as "galactically stinky" and "cosmic cheesebrain" both challenged her articulation and helped her to develop her emotive reading.

The storyline follows captain Geronimo Stiltonix of spaceship "MouseTrap 1" and his Soccerix team vying for the Galactic Soccerix title on planet Athletica. Initially mistakenly entering, Geronimo soon discovers the value of exercise, comradeship and most of all team work. The book prompted us to discuss these points and as well as encountering bullies and cheats. The characters that were introduced in the book were delightfully described as were the Soccerix matches, leaving my daughter literally at the edge of her seat wondering who would win each game.

I would thoroughly recommend this book and indeed all the other Stilton books to young readers as they challenge their reading and vocabulary skills while totally engaging the child in their storyline.

My daughter was very keen to get some more of the Spacemice series, as it had been a while. We had been reading mostly Wheelnuts and normal Geronimo stories. But she really liked the Spacemice books, so when this one became available I put my hand up. The subject matter for this book is all about soccer, which fits well with the FIFA World Cup excitement building worldwide.

Geronimo Stiltonix is invited to form a soccerix team with the crew of the MouseStar 1. The team forms via some trials, as well as the core group of Stiltonix's friends and family. Then the adventure starts, as we follow them through the tournament, and meet all the intergalactic aliens they face along the way. There is some light soccer facts, which was a good level of information for Miss 8. There were also snippets of factoids about the aliens in the match. These were well received by my daughter.

As always, the pages are colourful and bright. The font is pretty easy to read, with a mixture of different emotive fonts used for emphasis through-out the story. There are a couple of full colour spread illustrations as we arrive at the planet Athletica and during the matches too which were neat to look at. There are some funny matches, and lots of comedy. But there is also a big enemy and tension around cheating to contend with. We were able to talk about how cheating is bad and talk about being a good sport too.

I liked the emphasis on team work and friendship in this book, and while winning felt good it wasn't the main focus. The team were more concerned with playing well together and working with each other. These are essential social skills, so it's good to have them modeled by my daughter's hero, Geronimo. I also liked that, while some of the characters were still fairly mean to Geronimo, there was definitely a softer and warmer feeling about the relationships. I'm still not a big fan of Grandfather Shortpaws, and his bullying. Though, my daughter doesn't notice at least.

We have a re-newed sense of excitement about Spacemice in our house now, so it looks like we will be in the market for more books in this series for these school holidays. Two weeks coming up fast, so it's a great time to invest in a book like this one to keep them reading even outside of class.