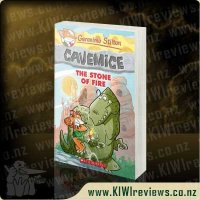 Welcome to the world of Cavemice! Geronimo Stiltonoot, Geronimo Stilton's ancient ancestor, lives in the village of Old Mouse City, where he is the editor of The Stone Gazette. Every day, he carves the news into slabs of stone, because the printing press hasn't been invented yet! Life in the Stone Age is full of adventure, whether he's dodging meteorites or trying to avoid a sabre-toothed tiger or ferocious T-Rex.

He's chiselled all of his outrageously funny tales into stone so everyone will know what it was like to live in the Stone Age!

This book is way out of my age group when it comes to reading books but my niece loves this series of books and talks about Geronimo all the time so it was great to finally put a face to the name.

I am a big kid at heart and I love dinosaurs! The book is set in prehistoric times and everyone knows that means dinosaurs so I was super excited to open the book and start reading...hahaha...and I wasn't disappointed. The colourful illustrations inside the book would appeal to all young children and the font is also very visually appealing and the use of colourful and different fonts right throughout the whole book is great.

The pages within the book also feel thicker which is great for younger hands too so the pages wouldn't rip easily under younger fingers. It is a shorter book that didn't take long to read for an adult but I could see it taking a few nights worth of reading for a younger person. Even though when me nearly 8 year old niece read the book it took her less than 3 hours but she is a real book worm and loves her books.

I have a couple more books in this series and I am keen as a bean to read them to see what other adventures Geronimo gets up to and how he will think his way out of trouble which just seems to follow him around if the first book is anything to go by.

When I arrived home with a box of Geronimo Stilton books recently, thanks to Scholastic and KIWIreviews, my daughter didn't know which one to pick first. She loves silly scaredy-mouse Geronimo. Upon each book coming out of the box, she gasped with delight and ripped each book from my hands. She is not a very confident reader, so seeing her love of books increase is heartening for me. Its become a bit of a treat to have me reading chapter books during baby's nap as well. We cuddle in together and go on a mousey adventure.

The Cavemice series is an all new prehistoric adventure with Stilton's ancestor Geronimo Stiltonoot. As an adult, I found the ancestor thing a bit of a stretch. Its basically the exact same setting as New Mouse City. There is the newspaper and all the same characters, just cave-mousey. There are dinosaurs everywhere, and the baddies are sabre-toothed tigers. However, my daughter loved it. She is into Dinosaurs anyway and enjoyed the Dinosaur Rescue series very much. I did find there was a bit more yucky stuff in The Stone of Fire, which also appealed to her.

I liked the little fun facts scattered through the book and the funny meatball soup recipe. It almost looked like you could make it and eat it. Though I'm not sure my daughter would eat soup. Overall, it was another fun adventure with Geronimo. Though I kind of think they should have had it as a time-travelling adventure that could have gone on and on until he found a way home.

Long before the Commonwealth of Empires, long before the Dato Bloc rebellion, the Sol Apotheosis Movement created a group of super-soldiers to spread their agenda throughout the galaxy. But something went dreadfully wrong and entire star systems ceased to exist...

Morgan Roche had been an intelligence agent for the Commonwealth of Empires when she turned renegade to determine the truth about a man named Adoni Cane. ... more...