« Bear on a Bike review 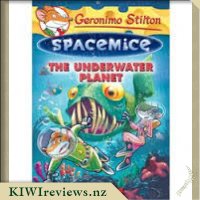 Disclosure StatementFULL DISCLOSURE: A number of units of this product have, at some time, been supplied to KIWIreviews by Scholastic (NZ) or their agents for the purposes of unbiased, independent reviews. No fee was accepted by KIWIreviews or the reviewers themselves - these are genuine, unpaid consumer reviews.
Available:
April 2016

While at the beach, Geronimo Stilton stumbles upon a mysterious treasure map. The spacemice follow it and end up on Aquarix, a planet that's entirely underwater. During their exploration, they face fur-eating seaweed, ferocious piranha aliens, and ... pirate spacecats! Squeak! Can the spacemice keep the spacecats from stealing the treasure?

Thereâ ™s a parallel universeâ¦. And Geronimo Stilton has discovered it, and so the Space mice series has been born. All the famous Stilton characters are part of this new parallel dimension. The story starts with Captain Geronimo planning a day off, until his cousin catches him in the act of sneaking off. Soon everyone was joining Captain Geronimo in his day at the beach, but as everyone knows the company of family and friends means fun amplified. As the day progresses itâ ™s time for a game of Frisbee, and this is when they stumble (Literally) across something mysterious, and in the age old formula of the Stilton stories this is when the story begins to unfoldâ¦. Our mousey heroes began to un-mouse what the mysterious object is, and imagine their delight when they discover itâ ™s a map!

Well thatâ ™s enough of that or Iâ ™ll give the plot away! Itâ ™s safe to say this is a wonderful read, and in the furry footsteps of the books that precede it, it broadens our young readers vocabularies with words like hypothesis, bizarre, navigate, manoeuvres, churningâ¦ and on and on these words are woven into the text, but stand out in different fonts and with bright colours, to ensure that our young readers are drawn to them, and these words impact on our readers minds.

As a parent I donâ ™t like this series as much as the other Stilton books simply because it is all science fiction, so itâ ™s not peppered with real facts. It is still full of the delightfully colourful drawings and little descriptions but they are all imaginary. I didnâ ™t know how my girl would like this, as in my mind space mice are a more boy type genre but I didnâ ™t hear any complaints from my young readers, in fact I had difficulty getting this book back to write my review! Based on that I would say this is another successful book within the Stilton series, and my young readers are keen to read more of the space mice stories. All Stilton fans would like to read this and I can see that readers who are star wars mad and donâ ™t tend to deviate from anything around the star wars culture would be captivated by these because of the space element too.

It's been a while since we've read a Geronimo Stilton book and I must say that my son loves them just as much as ever. Spacemice is a spinoff from the original Geronimo Stilton series and involves Geronimo Stiltonix (the Geronimo Stilton of a parallel universe) and his crew as they embark on lots of different space adventures. In this book Geronimo discovers a mystery orb which then leads to a treasure hunt on an underwater planet.

There's lots of action and humour which is what we've come to expect from a Geronimo adventure. Stiltonix is a total scaredy mouse which I think makes him more relatable and he's backed up by his family and friends, some of which have very bold personalities and really add to the overall story.

The chapters are quite lengthy with lots of words on each page and plenty of bold and colourful illustrations. The use of differing fonts and text sizes helps to break up the text and makes each page interesting to look at. I think this is particularly good for younger readers and makes this book a good first introduction to chapter books. I love that each book is a stand alone adventure so you don't need to read any of the other books to know what's going on. We can't wait to see where the next book in the series will take us.

Aeons ago, a super-scientific culture known as 'Angels' had left incomprehensible relics all over the galaxy. Among these phenomena were the Stations, whereby human spacecraft could jump instantly from one part of the galaxy to another. And from them the brilliant Angel technology could be explored and exploited.

One of these stations orbits the planet Kaspar, where the only other known sentient species outside Earth has been ... more...