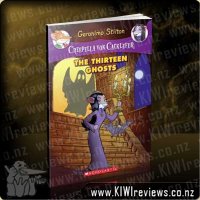 Disclosure StatementFULL DISCLOSURE: A number of units of this product have, at some time, been supplied to KIWIreviews by Scholastic (NZ) or their agents for the purposes of unbiased, independent reviews. No fee was accepted by KIWIreviews or the reviewers themselves - these are genuine, unpaid consumer reviews.
Available:
September 2011

Creepella von Cacklefur and her niece, Shivereen, visit scary Squeakspeare Mansion. There they meet Bobby Squeakspeare, a descendent of the famouse writer, William Squeakspeare. Will the spooky rooms and ghosts they find inside the mansion be friendly - or frightening.

I bought this book for my 8 year old daughter as she has been absolutely in love with geronimo stilton for a few years now and when I seen this I thought it would really appeal to her as it was a more girly version.

Creepela von Caklefur is also writes for a newspaper much like Geronimo Stilton called the shivery news, so it follows along the same lines although I think it appeals more to girls.

In order to write her latest story Creepela has to go interview some ghosts at a haunted mansion to find out some research on what ghosts like for example what houses they like to haunt and what their secrets are to being scary. She goes there with her friend Billy who is a scaredy mouse. They set off through the haunted mansion to find the ghosts with Billy getting scared at every noise or going on.

When the y find the ghosts they find out the ghosts are actually not frightening at all and are actually very nice and all have their job to do around the mansion such as cooking and cleaning.

A really nice story that keeps the suspense right to the end, beautifully illustrated and with interesting font.

Creepella Von Cacklefur, a pretty cool name huh?! My nearly six year old son and I loved this book. I read it to him over a few nights. At first I didn't know if he would like it as he is used to a picture books and this had more words, however the pictures this book does have are really cool. There are pictures describing everything, maps and a maze, as well as pictures and names of all of the characters, who are mostly mice and have really fun names like: Billy Squeakspeare, a romantic novelist. Chef Stewrat, the family cook, and Kafka, the family's pet cockroach! Also each page has many words in different font and colours which makes it heaps of fun to read. There are also neat phrases like: "A breath of wind, fainter than a mummy's sigh", "A pink jacket made of the finest cobwebs" and Creepella's favourite perfume is "The scent of lizard's spit"....ew!

The story is about Creepella (who lives in a creepy town, in a creepy castle, with her creepy family) who is searching for an interesting story to write an article about, which leads her to a haunted house where 13 ghosts live.

I would say this book is roughly aimed at 7-11 year olds. I did wish the book had a few more chapters though because I felt the story could have had more depth to it and would have been more interesting if all of the quirky characters having more of a role in the story. However the 'colourfulness' of the book makes up for it. We certainly would love to read the next one.

The Thirteen Ghosts is the first of the series "written" by Creepella Von Cacklefur and "published" by Geronimo Stilton. Originally written in Italian these have recently been translated into English.

The Thirteen Ghosts is probably best pitched at the 8 year old and up reading age. Every page has colourful illustrations related to the text. The story is very simple as Creepella goes to Squeakspeare Mansion to interview some ghosts for her newspaper The Shivery News. When she gets there she meets Billy Squeakspeare who has just inherited the mansion. They go inside to meet the ghosts and find out the identity of the 13th ghost. Scattered throughout the story are descriptions of characters, mazes, maps and fantastic illustrations to tell and elaborate the story.

The text also is littered with type in a different size and colour. This may pose a difficulty for children if they require standardized text to follow sentence construction but otherwise this technique will captivate the younger reader.

Because the books are so full of description within the text and in drawings I found it a little frustrating reading this story to a preschool child. A child who is able to read independently would spend hours pouring over the pages and the pages are so interesting that I think this would hold an older child's attention well.

These books make a lovely change from stories about fairies and stories that have violence etc in them. If you have a child who likes detective type mystery books this is definitely a series worth checking out.

I am looking forward to reading more of these books and can see us slowly acquiring the whole series over time!

Sammy Baker is a quiet kid who wishes he wasn't so shy and timid. He is frightened but eager to prove he can be brave. On Halloween night, he follows his friend to the Marple House, an abandoned mansion on the other side of town.

Just past midnight, he feels a cold tingle at the back of his neck. The chill spreads across his body. It's unlike anything he's ever felt before. Soon, his whole head feels like a block ... more...