« Underland Chronicles 2 - Gregor and the Prophecy of Bane review 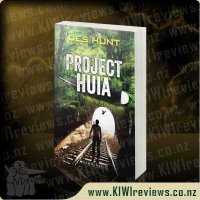 Disclosure StatementFULL DISCLOSURE: A number of units of this product have, at some time, been supplied to KIWIreviews by Scholastic (NZ) or their agents for the purposes of unbiased, independent reviews. No fee was accepted by KIWIreviews or the reviewers themselves - these are genuine, unpaid consumer reviews.
Available:
July 2013

"She fell from the air, her wings no more use than a ripped parachute."

With a flash of yellow wattles glowing against the sheen of her black feathers, the frightened Huia whirls clumsily across the ragged gorge. Mavis and Jim scramble after the injured bird, but to reach her they have to take a jigger through the long, dark rail tunnel. And halfway through, they hear the roar of a train coming...

Fighting a family of thugs and a long-lasting jinx, Logan and Grandpop Jim attempt to unravel the mystery of a Huia that vanished long ago.

Wolves of the Beyond - Star Wolf
Rating: 7.8

At first, I didn't even know what a Huia was, let alone that it was a New Zealand bird, but this story has now made me aware of what they are, and the fact that they are extinct. It was a big surprise to me that the story was based in the Manawatu region, which is the region in which I spent most of my life! There were also references to Hamilton, which is where I now live! The story had quite a good beginning, and there was a dose of action right in the first chapter, so that was enough to encourage me to continue.

By this point I didn't know that Huia were extinct, so to me it sounded like they were still alive today, but they're not. It was surprising when the story slipped from modern day to sometime after the end of the second world war, and back then I think most trains still ran on steam, so it took a while for me to adjust to the sudden change in time zones. The story was very moving, my emotions flowed with it rather closely, but the worst parts were when the enemy, a family of total morons called the Carson's, kept trying to steal the Huia, they were pretty much a whole family of bullies!

In the middle of the story, I thought that it was going to end with the Huia still being alive today and that some sort of breeding program or DNA experiments, and I was right on one outcome: Project Huia is some sort of project where Huia DNA is used to bring them back to life as embryos grown in a lab. Unfortunately, the last remaining bird, which the main characters had named Olivia, was killed near the end of the book, and was preserved in a train tunnel until today.

The Carson's were my least favourite characters, whenever they did things, like launch physical attacks on other people, or make threats, or just be plain bullies, it filled me with rage. Reading this book was like turning on a teleporter and witnessing the action myself, my emotions flowed with the storyline so much that I knew I wasn't just reading a book, it was more than that.

This series about a very special pet shop where magic can, and does happen. It is the purrfect read for animal fans.