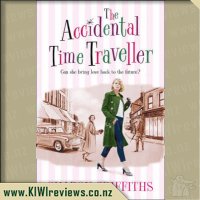 Life on Mars meets It's a Wonderful Life in this inventive romantic comedy that looks at what we can learn from the past!

Journalist Rosie Hartford is having an odd day. Or one hell of a hangover! Having had a blazing row with her boyfriend - fellow journalist Will - she reluctantly sets off for her latest assignment: an interview with one of the residents of The Meadows, a grotty local estate about to become the set for a major reality TV show, The 1950s House. But stepping through the front door, Rosie finds herself in a different house - and transported back in time. Everything is grey and drab - the food, the clothes, the TV.

It's like the world is in permanent black and white. It's not long before Rosie realises what's going on. She's obviously a contestant on the 1950s show! She's pretty miffed she's not been given warning, but she might as well give it a go - after all, the cameras are always watching and the first rule of reality TV is always keep smiling! But what really sends Rosie into a spin is the fact that Will is there too - but here he is known as Billy and has been married since he was 16 to Rosie's best friend.

In the 1950s, Will/Billy is a family man and devoted father, a side to him that Rosie finds hard to imagine. He grows vegetables, repairs shoes and even has a shed. He is, in fact, a grown up. The truth slowly dawns on Rosie that this is reality, not reality TV. After she gets over the shock, she begins to embrace daily life 1950s-style. Gone are the excessive consumerism, drifting relationships and cheap thrills of the Noughties. In its place is make do and mend, commitment, duty and honour. Together Rosie and Billy make a great team, covering dramatic local stories, and inevitably growing closer until Rosie falls in love with Will/Billy all over again. But now he has a wife and kids and is out of bounds! Unless she can get back to 2008!

I love reading and will read anything that has a good storyline or sounds interesting enough on the blurb. What caught my eye is the question, what would have happened if she had never gone back in time? How did her actions in the past effect the present/future? Was she supposed to go back to change something?

I did find that you had to really stretch your imagination and accept that time travel is possible. I have often thought it would be great to experience life in the past but then think of all the things I would miss and decide that I really wouldn't want to go back.

I managed to read the book in a few hours and have since re-read it, just because I don't believe in time travel doesn't mean I don't get to relax and have a laugh at those around Rosie and her reactions to them. I would reread the book again so would recommend it to anyone who wants to just relax and forget about the present.

Marmaduke Duck was a duck with pluck.
He was bold, he was brave, he was Dare Devil Duck.

But when Marmaduke Duck trades sweet-shop life for adventure on the wide blue seas, he gets more than he bargained for.