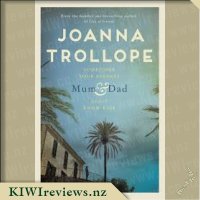 It's been twenty five years since Gus and Monica left England to start a new life in Spain, building a vineyard and wine business from the ground up. However, when Gus suffers a stroke and their idyllic Mediterranean life is thrown into upheaval, its left to their three grown-up children in London too step in....

Sebastian is running his company with his wife Anna, who's never quite seen eye to eye with her mother in law

Katie a successful solicitor in the City, is distracted by the problems with her long term partner Nic an the secretive lives of their daughters

And Jake, ever the easy going optimist, is determined to convince his hew wife, Bella that moving to Spain with their eighteen month old, would be a good idea

As the children descend on the vineyard, it becomes clear that each has their own idea of how best to handle their mum and dad, as well as the family business. But as long simmering resentments rise to the surface and tensions reach breaking point, can the family ties prove strong enough to keep them together.

You know you're enjoying the book when everyone is waiting for you, and you find yourself saying one more chapter, and then before you know it, it's been two and a half hours and you still have not had a shower. Then later on in the day, instead of relaxing in the bath and resting your foot you quickly get out to continue to find out what will happen next.

It is not that I loved the book - I found it had a lot of short comings - but I found it so fascinating, watching the family dramas unfolding, finding out what would happen next, that I could not help but continue to read on. When I had read that it was in a Spanish Vineyard I expected to be whisked away by descriptive words and be pulled into a luxurious environment but I found the writer lacking in scenery objectives and instead more involved with the personalities and their short comings.

The story flowed nicely, and most pages were turn worthy but I did have difficulty with some of the words, terms, manners and sayings. I don't think of myself as a stupid woman, but I found on more than one occasion I would come across a word and have no idea what it meant, and just like with my eight year old I would read a couple of sentences a head and then come back to the word to figure out what it actually meant. Even in some of the conversations they would say something and I would be at a loss as to what it meant and to why it was even included. Numerous times Monica or Katie would not finish a sentence and instead start talking about something else, completely not related, and I would have to pick up on two completely different topics (now I know how my husband feels). Besides these common occurrences, I still found I enjoyed the book and was left wanting to find out what happened to Gus and Monica's relationship, did Jake and Bella become successful and what happened to Marta and the rest of Katie's daughters. I really hope there is a sequel.

This is a great book if you are fascinated by family dynamics and love reading about issues that most people hide to the rest of the world. If you like to pretend 'what would I do' if I was in that situation. If you enjoy reading about other nationalities, then this book is great, but like I said - if you enjoy books that envelop you in to different worlds and everything is spoon fed to you this might not be the book for you.

Eccentric billionaire Warren 'Wheelie' Wheelnut has decided to mount the biggest, maddest, most off-the-scale competition ever.

He has created five extreme race tracks: from the desert to a haunted town, outer space, underwater and dense jungle, it's not chicanes and hairpin turns the drivers need to be worried about, it's aliens and giant squid.