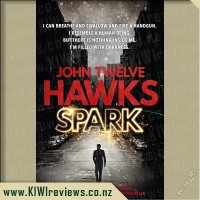 Disclosure StatementFULL DISCLOSURE: A number of units of this product have, at some time, been supplied to KIWIreviews by Penguin Random House or their agents for the purposes of unbiased, independent reviews. No fee was accepted by KIWIreviews or the reviewers themselves - these are genuine, unpaid consumer reviews.
Available:
October 2014

He has Cotard's Syndrome. He believes he is dead. Which makes his job as a hired assassin neutralising 'problems' for DBG, a massive multinational corporation, very simple. He carries out the task - and feels nothing.

Now DBG has such a problem. A key employee, Emily Buchanan, has disappeared, taking with her a fortune and priceless information which could destroy the company. Jacob must track her down. In previous assignments, he had worked with cold logical precision, but this time he has to confront a threat that he first must understand before it destroys him...

The book is set in a dystopian future where androids, known as nubots, have replaced most human workers causing mass unemployment and following the events of a terrorist attack known as 'The Day of Rage', there is a surveillance system in place (EYE) that monitors everyone.

The book is written in the first person which is a style that you either love or hate and is told from the point of view of Jacob Underwood.

Jacob Underwood is an assassin working for a multinational corporation, who after an unfortunate motorbike accident has undergone a process of 'transformation' where he no longer feels any attachment to the world or his body and the only emotions that he possesses are those of boredom, curiosity and disgust. He no longer feels any ties to friends or family, hates being touched and subsists solely on a nutritional drink meant for the elderly and sick. He describes himself as a spark floating unattached within a human shell. In medical terms, he suffers from Cotard's Syndrome.

It takes a long time for the book to get going as Underwood takes on a number of assassination jobs in the lead up to the actual storyline. Normally he sees the world in stark terms but things start to get complicated when he is given the task of locating a missing woman, Emily Buchanan. She stirs some unfamiliar feelings and emotions in him which then leads to him having to make the difficult choice of either killing her or breaking with his employers.

There is a lot of technical jargon that made this book hard for me to read and I was only able to read for short bursts at a time before suffering from information overload - I would often find myself rereading the same paragraph over and over in a bid to understand it. For most of the book, the story flashes between Jacob's past and present, explaining how he became the way he is now and what he went through to get there.

I'm not sure what the thriller aspect was supposed to be as it felt more like a sci fi crime/mystery novel. It's not a light read and definitely not for someone like me who is technologically challenged at the best of times.

Within the pages of this book
You may discover, if you look
Beyond the spell of written words,
A hidden land of beasts and birds.

For many things are 'of a kind',
And those with keenest eyes will find
A thousand things, or maybe more -
It's up to you to keep the score ...