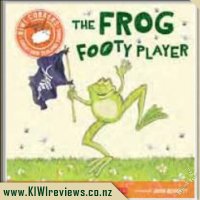 In this version of the Grimm Brothers' The Frog Prince, Kiri kicks her footy into the pond. It is retrieved for her by Archey the frog, who in return demands to sit on a soft pillow, eating chocolate fish and watching the rugby on the big-screen TV.

Kiri's annoyance turns to surprise then joy, when, in the excitement of winning the game, she kisses Archey and he turns into an All Black.

The kiwi corkers series is a favourite of mine and this one is a fantastic addition to the series. Everyone enjoys a old traditional story but to add the kiwi twist to it makes it perfect to engaged the kids of today.

I have never read the Frog Prince to my son before so decided not to share the real version with him until we had read this one. This story has been cleverly written in rhyme which was very appealing to my son. Every page he was repeating the words that were rhyming and there was plenty of rhyme - great for a teacher to use in a classroom. Throughout the whole story my son was fully engaged in the words and illustrations. It was great that he was able to pick up how the characters were feeling. My favourite part however was when I read about the frog turning into a football player. The look on his face showed how engaged he was in the story.

I took the opportunity to share the traditional story with my son after he was familiar with this one. I didn't talk about the moral of the story however he worked out that all on his own.

I was blown away with the price of this book. Very affordable. I am definitely going to be purchasing some of this series to send to my nephew that lives overseas.

We have enjoyed the Kiwi Corkers series so far. I have read many of them to the kids, and they are always fun. A good twist on an old tale, with a big dose of Kiwi culture in the mix. It's great for my kids to see such familiar things in their books.

My preschooler is really into frogs. She often talks about "froggets" and pretends she is one. So when she saw this book, she was immediately excited. She pointed at the cover and said "frogget" to me and her sister. I said, "I wonder what this frog is going to do?" Neither child was sure from the cover, but they were keen to get into the book, trying to flip the cover open in my hands.

As we got into the story my eldest remarked that the set up was a lot like a fairy tale she knew about a frog and a ball. That was great, because she picked up on it pretty quick. She was very amused that the ball wasn't a golden one, and that the girl character was not especially princess-like. For her, this was excellent because she likes fairy tales but she'd rather be a dragon rider or a ogre fighter than the girl stuck in the tower.

This story was really neat. It follows the fairy tale premise, but with a modern twist. It helped a lot that my husband is really into rugby. So the girls are use to watching at least the start of the match, and hearing him shout with excitement at the screen. The pictures in this book show the excitement of watching a game so well. The starting smiles, the bursts of excitement and the celebrations when your team is going well.

Each picture had lots of things that we could look for too which was fun for both girls. It became a bit of a game for all of us. Both girls licked their lips at the idea of chocolate fish too! I can't say we have ever watched the rugby with chocolate fish, but maybe we should - they might watch a bit more of the game with us!

Like the fairy tale, there is also a great moral to the story about keeping your word when you make a promise. This lead to some conversation about making promises too. We talked about what it was to be a good friend and how you earn trust by keeping your word. I felt it was important to emphasize that me keeping my word to them was just as important as them keeping their word.

Score: 8.0
Product reviews for listing 5273: I Even Funnier: A Middle School story -  Written by: James Patterson

Middle schooler Jamie Grimm has ig dreams of being the best stand-up comic in the world - and he won't let the fact that he's in a wheelchair get in his way. I even funnier is the follow up story to I funny.