Tawhirimatea: A Song for Matariki review 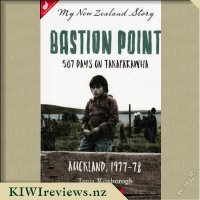 Disclosure StatementFULL DISCLOSURE: A number of units of this product have, at some time, been supplied to KIWIreviews by Scholastic (NZ) or their agents for the purposes of unbiased, independent reviews. No fee was accepted by KIWIreviews or the reviewers themselves - these are genuine, unpaid consumer reviews.
Available:
May 2017

"I'm writing this by lamplight. That's right. Like Swiss Family Robinson or something. We're up here with no electricity or running water, while just across from us and down the road is the real world."

Erica Tito had the perfect summer holiday planned. Then her father decided the whole family would pack up and join the protestors at Bastion Point in Auckland. No way! Instead of spending dreamy summer days training Silver, her first-ever horse, Erica and her family have to camp in tents. At first everyone thinks the protest will be over quickly, but as weeks turn into months, it becomes clear that Erica will not be going home and, worse, may never see Silver again,

Through Erica's heartfelt diary entries we learn about the daily lives of the protestors, and listen in on grand speeches and fiery confrontations between the protestors, Ngati Whatua elders, police and politicians. And we witness the distressing eviction of the occupiers - all seen through the eyes of a Maori girl previously unaware of race and land issues.

This book is part of the My New Zealand Story series which makes history come alive. It includes archival photographs of the actual event.

I loved this book. I didn't realise that it was a fictional story and I really felt for Erica and her family. I know this is based on a true story and can't believe how badly the maori's were treated. I definitely want to know more about this and strongly think things could have been better handled. I found the shorter entries easy to read and lost myself in the book. The passing of the young girl with the raw emotion made me sad for the people.

This book is a must read for any new Zealander who wants to learn more about the country, the trials and the history. I was slightly confused with the dates at the end of the book in the letters, however in just a few short months this won't be an issue. This also makes me want to read more about politics and more of the books in this series.

My six year old decided this is an awesome bedtime book and can't wait for me to get to the end so we can start it again and it has become a talking point in class. I totally recommend this book to others.

I firmly believe that any book which can bring history alive for young readers and engage them in reading is a potential treasure. Children are so often seduced away from reading by other distractions that are more immediate: modern technology provides so many other ways of providing information. Television, the Internet, social media, cell phones - all, in their own way, stimulate learning but often at the expense of offering a deeper understanding of issues.

In this book, there are several strands which recur and are explored in such a way as to encourage the young reader to find out more. There is an extensive bibliography of works that can be accessed for further study, including film documentaries. There are some wonderful archival photographs which capture the feel of the event and the scope of the protest. There is a glossary of some of the Maori words used in the text. There is a timeline of the Ngati Whatua land claims - a history lesson in five pages! And finally, there are the words of "Erica" herself as she chronicles the time she spent (nearly 18 months) on Takaparawha (Bastion Point) with her family, vividly presented in diary form in the language of a twelve-year-old girl.

The story is told with energy and enthusiasm; there are details of contemporary social events and customs which will be of interest to the modern reader. There is a reference to the school library's not having any information on Parihaka: this would have been common in the 1970s due to the sidelining of local history, when the emphasis in the syllabus was still on British and Commonwealth history. A ballpoint pen is referred to as a biro, and Robert Muldoon is the Prime Minister. Men are the breadwinners and the warriors while the women are expected to be the home makers. Erica challenges racist and sexist stereotypes in the classroom and then in her interschool debate, foreshadowing the major societal changes that are in the wind.

Although I enjoyed the story and felt that it was thoughtfully and creatively crafted, there were a few disappointments - mainly in the editing and organisation. The glossary is useful but only to a point. There are some Maori words which are clarified in the context of the story so do not need to be included in the glossary, but there are others which are used in isolation (e.g. korero, kaore) and which might confuse a reader who is not familiar with Te Reo - especially a reader from overseas. Those of us who speak Maori, even if not particularly fluent, will recognise these words without difficulty but not all readers will.

There are also two significant errors in the Maori text which completely alter the intended meaning. The support from people throughout Aotearoa is referred to as "a miki in the noho of Muldoon". The word "noho" means something quite different: the correct spelling is "nono"! Later in the text, Erica responds to a policewoman's request for her name by delivering a full mihi. However, she says "Ko James raua ko Keri toku matua". Since she is referring to both parents, the correct form should be the plural "oku matua". I feel that it is vital that typos such as these are eliminated from future editions as it is so important to tautoko the Maori language along with the English.

With the errors noted, this is still a worthwhile read - both as an incentive for young people to read by presenting the story from the point of view of a young person they can relate to, and in terms of bringing history to life so painlessly. The story of Takaparawha is a sad example of indigenous disempowerment, and carries a powerful message for today's readers. But it is part of our heritage and as such should provide a lesson for future generations to learn from.

The rattletrap car doesn't go fast and it doesn't go far - and when a family set off to the lake in it one hot day it soon starts to fall apart. But lumpety bumpety, a beach ball replaces the wheel; wappity bappity, a surfboard replaces the floor; a thermos of razzleberry dazzleberry snazzleberry fizz does for the petrol tank, all stuck on with chocolate marshmallow fudge delight! The rattletrap car reaches the lake, and takes the family safely - if noisily - home again.