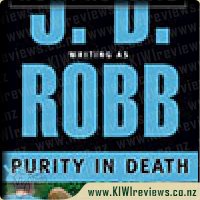 Purity in Death finds our heroine on an assignment that leaves her even more tormented by the past. When a deadly computer virus is unleashed on society's undesirables (namely, child abusers), it's up to Eve -- along with her astonishingly handsome husband, Roarke; her feisty aide, Peabody; e-geek McNab; and her mentor, Captain Feeney -- to discover the origins of the virus and shut down the clandestine vigilante group that created it before the next target is marked for execution.

Eve's task is complicated further as she grapples with her demons (as a child-abuse victim, it was a matter of survival that led Eve to kill her father) and squares off with Roarke, who does not regard the group's intentions as inherently bad. Once again, she must muddle through those gray areas of right and wrong as she seeks to "stand for the dead," and answer the question of whether the group is justified in its actions, or whether they simply represent a new breed of terrorist.

Paedophiles and drug dealers begin dying from a computer-generated virus that literally blows the mind of its victims. It doesn't take long for Eve to figure out that a vigilante terrorist organization is handing out its own form of justice. Figuring out who it is will be the hard part. Suspects could be anyone from members of the justice system to formerly abused children, the latter of which strikes a personal and painful nerve in Eve, who was abused as a child.

Purity in Death really shows how Eve's little team have turned into one happy little family and of course like any family there will be the occasional drama. Purity in Death stood out to me the most because of the characters this time. Yup, the murder mystery was great, and worrisome considering how many people use computers, and this was transmitted via computer, it was the characters that had me hooked.

Purity in Death is another good addition to the In Death book series and particularly great for character development.

On any weekday morning, if you clambered over the crates of fruit and veg, climbed the five flights up the rickety staircase and entered Associated London Scripts, you would find Spike Milligan, Eric Sykes, Ray Galton and Alan Simpson, shaping the latest shows, swapping the odd story and searching ... more...