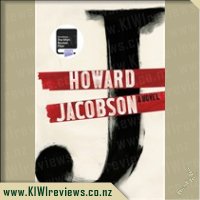 Disclosure StatementFULL DISCLOSURE: A number of units of this product have, at some time, been supplied to KIWIreviews by Penguin Random House or their agents for the purposes of unbiased, independent reviews. No fee was accepted by KIWIreviews or the reviewers themselves - these are genuine, unpaid consumer reviews.
Available:
September 2014

Two people fall in love, not yet knowing where they have come from or where they are going. Kevern doesn't know why his father always drew two fingers across his lips when he said a world starting with a J. It wasn't then, and isn't now, the time or place to be asking questions. Ailinn too has grown up in the dark about who she was or where she came from. On their first date Kevern kisses the bruises under her eyes. He doesn't ask who hurt her. Brutality has grown commonplace. They aren't sure if they have fallen in love of their own accord, or whether they've been pushed into each other's arms. But who would have pushed them, and why?

Hanging over the lives of all the characters in this novel is a momentous catastrophe - a past event shrouded in suspicion, denial and apology, now referred to as What Happened, If It Happened.

J is a novel to be talked about in the same breath as Nineteen Eighty-Four and Brave New World, thought-provoking and life-changing. It is like no other novel that Howard Jacobson has written.

This is a book rightly deserving of its present inclusion on the Man Booker Shortlist for 2014. As such this most recent novel of Howard Jacobson has received many literary reviews that will do this novel far more justice than my own.

Right from the onset this book had my attention with the first page posing the argument being the parable of the Wolf and the Tarantula. This sets the scene for what follows which is a multi layered and complex novel that says more about what isn't actually written than what is. From my own experience of this novel whilst I understood it to be complex, and almost speaking in tongues at times, I did understand it to be about the Jewish race and the Holocaust quite early on. By the end of the novel I did find myself still wondering though if I had correctly understood the novel and Howard Jacobson's intent. Thankfully after reading a few reviews I am corroborated in my interpretation of this novel. That said however I did find this a very difficult novel to read and rather than being one that I stayed awake for several nights reading I would read a few pages then fall asleep.

I think the allusion to What Happened,If it Happened and the parallel with the holocaust and what has been experienced by the Jewish race was at times so done in such a way that it just lost my attention as it became to difficult trying to work out if I was understanding the story as it was intended. This is one of those novels that probably is more engrossing and enjoyable second read around when you have actually understood what the story is all about.

I can see this as being a classic text for literature studies in the years to come and it is indeed one of those novels that you do feel the urge to reread to unpick and analyse. Although I didn't find this an enjoyable and engaging novel it is certainly rightly deserving of its place on the Man Booker Shortlist for its literary merit and topic and one that is worthy of time spent reading it. This is definitely a thought provoking novel but one that should be read when your mind is alert and inquiring rather than as I did on the brink of sleep.

The allied factions of humanity, along with the waning Ildiran Empire, the powerful water elementals and sentient trees, have defeated the near-invincible alien race of Hydrogues, driving them back into the depths of gas-giant planets. But before peace can heal the wounds between the races, two ancient enemies return: the capricious fire elementals, the Faeros, who mean to burn all those who fought alongside their enemies; and the lost hive race ... more...