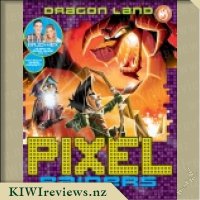 Now known as the Dragon Riders, Rip and Mei are stuck in a land with bandit bullies, spying firebugs and warring dragon clans - while being followed everywhere by a grumpy dragon who owes them a life debt!

Can they survive an epic battle and complete their quest for the Etherstone?

My son loved the first book in the series but I must admit that I wasn't overly impressed by it as it reminded me too much of Minecraft with its blocky graphics and gameplay style, but I guess with Minecraft still being so popular it was a great way to draw their target audience into the series.

This is the second book in the Pixel Raiders series and if you haven't already, I definitely recommend reading the first book before picking this one up. The story begins right where book one left off which finds our heroes a loft on dragon back and trapped in another game world.

Whereas the first book is based on a blocky Minecraft style game, this one resembles a typical RPG with magic, dragons, side quests and different character classes. I really enjoyed this book. I think maybe because it's based on the types of games that I like to play and I could easily relate to the story and the different scenarios that our heroes faced. The story is fast paced and action packed with a bit of humour thrown in. It's very well written and perfectly suited to its target audience. The chapters are quite long with lots of words and a few black and white illustrations.

My son (9 years) is a gamer and he loved this book. The fierce dragons, raging battles and epic boss fights had him constantly begging for "just one more chapter". There were a lot of unanswered questions in the first book which are finally answered and we are given more information as to where the series is going. We're excited for the next book. When the first book in this series came out, Mr Six and I thoroughly enjoyed it and he declared it was one of his favourite books, reading it over and over. So when we realised there was a Book 2, we were both delighted to get the opportunity to read it as well! I read it through first and then suggested I read it to him, but he was having none of that - he wanted to curl up and read it himself! It is great to see kids so motivated to read that they choose to go ahead on their own.

I was interested to see that they used the word "mana" to mean "magical power" - I thought this was a Maori term which is used only in New Zealand, and this book is an Australian publication. However, after a little research, I found that the term is actually widespread in many countries around the Pacific, so once again I have learned something from a book in this series!

We both liked the way that key words were highlighted in a different font so that they stood out. This made it easy to relate back to events that happened in the previous book in the series and joined up all the loose ends. It would be useful particularly for a child who had not read the first book in the series as the background is filled in. We also liked the way the graphics were simple and bold; the characters were recognisable to the point that Mr Six opened the book and immediately said "That's Mei!" as he pointed to her.

Kids (and adults) who are into computer gaming will be interested in the story - it highlights the line between fantasy and reality, dealing with a world where an enemy can just be zapped and disintegrate into thousands of pixels! Unfortunately that cannot happen in real life, but it is great escapism and prompts lots of discussion about the line between good and bad and how sometimes people can wrongly identify someone as a villain. There is a strong underlying message about not judging by appearances and being sure you have all the facts before you blame someone for something they might not have done.

Mr Six found the book just as riveting as the first and was eager to tell me so! He loved the way the dragon got angry when Rip thought she was a boy and shouted at her! Now we are both looking forward to the third book in the series to see what will happen at the next level.

Sssh... NOT for parents! You can keep a SECRET, right?

Clara and I have a herd of tiny, talking, oopsie-whoopsie, flying horses - and they're REAL!

It's true. Those naughty Miniwings get us into so much TROUBLE, especially that RAZZLY-DAZZLY Unicorn, Moonlight!

This book is the sixth in this delightful series, each of which stars one of the personality-packed, mischievous Miniwings in his or her own ... more...