« The Affair (season one) review 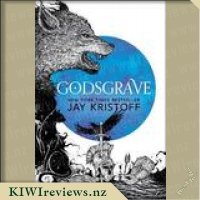 Disclosure StatementFULL DISCLOSURE: A number of units of this product have, at some time, been supplied to KIWIreviews by HarperCollins or their agents for the purposes of unbiased, independent reviews. No fee was accepted by KIWIreviews or the reviewers themselves - these are genuine, unpaid consumer reviews.
Available:
September 2017

Mia Corvere, destroyer of empires, has found her place among the Blades of Our Lady of Blessed Murder, but many in the Red Church ministry do not believe she has earned it. Her position is precarious, and she is still no closer to exacting revenge for the brutal death of her family. But after a deadly confrontation with an old enemy, Mia begins to suspect the motives of the Red Church itself.

When it is announced that Consul Scaeva and Cardinal Duomo will be making a rare public appearance at the conclusion of the grand games in Godsgrave, Mia defies the Church and sells herself into slavery for a chance to fulfil the promise she made on the day she lost everything.

Upon the sands of the arena, Mia finds new allies, bitter rivals, and more questions about her strange affinity for the shadows. But as conspiracies unfold, secrets are revealed, and the body count rises within the collegium walls, Mia will be forced to choose between her loyalties and her revenge.

This is the second book in the Nevernight Chronicle series.

Since reading the first book in this series, I had been looking forward to reading the sequel. I had always thought when reading the original novel, that there was more than enough material for another couple of volumes, so I am glad that the author felt the same way! Mia Corvere is a very different kind of heroine: she is simultaneously a killer and a saviour who sometimes gives the impression of believing she is a superhero only to re-establish herself (albeit temporarily) as a simple teenager. She is an all-action fighter who survives attack after attack with the help of her two "familiars" and some unexpected allies while wreaking havoc on her enemies and those who would injure her friends.

It was good to see the Dramatis Personae section included at the start of the book. This offered a potted biography of all the main protagonists, serving to remind the reader who had already read Volume 1 of who these people were, and to help these "lesser among you mortals" to pick up the threads of the story. I admit to being one of these lesser mortals; although I had read the first volume twice, it was some months ago and the refresher course was most welcome. The story is complex; the many facets mean that there are two or even three subplots unfolding simultaneously, crossing time and space with the only warning being a change between italic and roman scripts, with an additional change in font size to indicate when the shadow daemons, Mister Kindly and Eclipse, are speaking.

I found this volume to be more coherent than the first in the series, despite the intertwining strands and the continued inclusion of footnotes. The story was faster paced, and the footnotes less intrusive because they flowed along with the story instead of interrupting it. There is a goodly amount of gore, something which means the book is unsuitable for younger readers, but I don't think a young person would be able to follow the complexities of the plot and the continued cross-references to earlier events anyway. You definitely have to have your wits about you while you are reading, and I found the book was best read within a fairly short time period so the story stayed fresh in your mind.

One of the most profound quotes - for me at least - was the response that Ashlinn gave to Mia when the latter was reluctant to reveal her badly scarred face in case it would cause a negative reaction. Ashlinn described scars as gifts from one's enemies - to remind the recipient that these enemies were not good enough to kill him or her. This sums up the philosophy of the book, which is that a warrior should put aside personal pride and the fear of being found wanting, and just pursue victory to achieve the best possible outcome.

I look forward with anticipation to the final volume in this series. It will be interesting to see where Kristoff takes Mia next, and which of her companions will continue to be part of her story. There were several teasers included in the last few chapters of the book but which of these will be developed further remains to be seen.

Score: 10.0
Product reviews for listing 7285: Is That an Elephant in My Fridge? -  Author: Caroline Crowe

When Fred can't sleep, he tries counting elephants instead of sheep.

In no time at all, the house is full of elephants - splashing in the bath, flying around the ceiling and eating everything in the fridge - there's even a marching band on the stairs! Fred realises he'll never get to sleep with all these noisy elephants causing mayhem, so he comes up with a cunning plan to persuade them to pack their trunks. This fun-filled picture book is perfect to share at bedtime!