« A Brief History of Time review

ProdID: 855 - A Briefer History of Time
Written by Stephen Hawking and Leonard Mlodinow 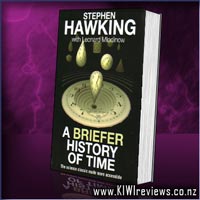 Disclosure StatementFULL DISCLOSURE: A number of units of this product have, at some time, been supplied to KIWIreviews by Penguin Random House or their agents for the purposes of unbiased, independent reviews. No fee was accepted by KIWIreviews or the reviewers themselves - these are genuine, unpaid consumer reviews.
Available:
Yes

Stephen Hawking's worldwide Best Seller, A Brief History of Time has been a landmark volume in scientific writing. its author's engaging voice is one reason, and the compelling subjects he addresses is another: te nature of space and time, the role of God in creation, the history and future of the universe. But it is also true that in the years since its publication, readers have repeatedly told Professor Hawking of their great difficulty in understanding some of the book's most important concepts.

This is the origin of, and reason for A Briefer History of Time: its authors wish to make its content accessible to readers - as well as to bring it up to date with the latest scientific observations and findings.

Although this book is literally somewhat briefer, it actually expands on the great subjects of the original. Purely technical concepts, such as the mathematics of chaotic boundary conditions, are gone.

Since Stephen Hawking wrote his version in 1988, people have given him feedback that, even though it was a "Beginners Guide to Big Thought", it still seemed too bogged down with minutae that really didn't cover, and in some cases drowned out, the points they wanted explained, and when it did focus on the key points, there weren't enough details about them. It was a even spread, instead of a selection of focussed topics covering the main bases.

Guess you really can't please everyone.

So, in 2005, the book was taken apart, re-written, trimmed and expanded in various places, and, with the help of Leonard Mlodinow (a stunning Physicist and author in his own right), this book has expanded on the key ideas raised in the the first version and has minimised some of the too-big concepts that, though highly informative, tended to get in the way.

On top of this, 38 wonderful, informative and witty colour illustrations have been included, that not only give the reader another perspective on the matter at hand, but also give you a bit of a laugh in places. (Prime example, the concept of Gravitational Attraction on page 21

Overall, though I can't really say much about this title without repeating what I said about the first version, I can say that any non-scientist would be hard pressed to honestly say this was above their heads. An even better summary of the history, and possible futures, of Cosmology and "What Happened, and What's Still to Come?" Get the hardcover version, as it will last better, and your grandkids are going to find this fascinating reading as well.

Start Right Workbooks for the New Zealand Curriculum are written and checked by experienced classroom teachers to meet the needs, interest and abilities of primary and intermediate school students. These workbooks have been thoroughly checked, professionally edited and are published by a leading New Zealand educational ... more...