ProdID: 5590 - Figgy in the World
Written by: Tamsin Janu 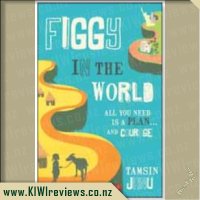 Disclosure StatementFULL DISCLOSURE: A number of units of this product have, at some time, been supplied to KIWIreviews by Scholastic (NZ) or their agents for the purposes of unbiased, independent reviews. No fee was accepted by KIWIreviews or the reviewers themselves - these are genuine, unpaid consumer reviews.
Available:
July 2014

Figgy in the World product reviews

Figgy has two problems. One is her name. Nobody in Ghana has that name. The other is that her grandmother is ill and needs special medicine. Figgy can't do much about her name, but she can do something for Grandma Ama.

She will go to America and bring back the medicine, and Kwame, her special goat, will go with her. Out in the wide world she will meet some bad people, but she will also find good friends.

Figgy in the World is the first young adults book I have read, well since I was a young adult that is. To be honest I've always thought young adults books were aimed at young teenagers and wasn't sure I was going to really enjoy reading this book but I am glad to say I was proved completely wrong. A fantastic book which really opens your eyes to the rest of the world and how lucky we are here in New Zealand.

The author of Figgy in the World does a great job of drawing you into her life - an 8year old girl growing up in Ghana where life isn't a perfect picture. The book follows Figgy as she runs away from home on a mission to go to America to get medicine for her sick grandma (who she thinks is going to die). This book certainly made me deeply appreciate the life I have and how hard others in the world have it. As Figgy continues to travel through Ghana she meets a lot of people who are both good and bad in so many ways. I really appreciated the way that the country of Ghana is described in such details that you really start to get a good feel of it. I have never been to Ghana so these descriptions helped me to understand the why's and how's of Figgy's life and her actions.

I read this book over a few nights but this was due to just being so tired I couldn't hold my eyes open long enough to read anything more. I feel this book definitely holds your attention and I could have easily have read it in one go. I am so glad to have had the opportunity to review this book and add it to mine and my daughters collection as I know in future years I will be reading this to her. I think this will be a great book to help to teach her about the world but also to help teach her about how lucky she is in the life she has.

While in general there is lots of sad throughout this book it is written in a humorous way that you aren't left feeling sad after reading it if that makes sense. The book also has a good/happy ending which I wont give away the details of

I did feel as though the last chapter or perhaps even two felt like it was rushed a bit more than the rest of the book, like you could tell all of sudden things were being wrapped up and the book was about to end. However this doesn't take anything away from the general greatness of the book. Fully recommend to others!

I sat down to read Figgy in the Wold last night. I wasn't sure what to expect, but as soon as I started reading I was drawn into Figgy's world. Figgy is 8 (nearly 9) and being in her head was a rare treat. You immediately know what she thinks about so many things, including her name which I thought was quite cute really. Figgy is growing up in Ghana and this story sees her travel through Ghana on her way to America for medicine for her Grandma.

As Figgy travels, she meets good people and bad. She works hard, earns money and continues to travel North. She has some difficulty moving due to differences of language even in her own country. The sights and sounds of Ghana are replayed through the eyes of a child. But this is different because she has grown up there as well, so many of the things don't seem strange to her. It really made me think how hard other people in the world have it.

There are scenes where even Figgy feels uneasy at the extreme poverty she is seeing. Because even though she has been poor by my standards, by Ghana standards she has it pretty good. About halfway through I had two thoughts. One was about my World Vision child. She is in another part of the world, but suddenly I just thought about her and was glad I was sending money to her. Her favourite colour is brown and her favourite food is beans. When I first learnt that, I thought it was kinda weird and sad. But now I think I understand it more.

The other thought I had was how is Figgy going to succeed here? I had very genuine concerns for her and her safety. I wasn't sure that she'd get to where she needed to be. As a parent I also felt how her family might be feeling, very distressed that she just disappeared and probably assuming the worse about her safety. While there is a lot of sad in this book there are some very funny parts too. I laughed out loud at her descriptions of things, especially her Grandma running.

I would say that I lost track of time. Before I knew it I was at the end of this book. I'm glad I did read it through once before reading it blind to my daughter though, as there are a few things that I will need to tread carefully about. But I think it will be a good way to introduce talking about other parts of the world too.

This cute little kitten has just one wish for Christmas-she REALLY wants a hippopotamus! How will Santa get this present under the Christmas tree? He's going to need a bigger sleigh!

I Want a Hippopotamus for Christmas was originally released in 1953 by 10-year-old Gayla Peevey, and was an instant hit. The song has been an enduring Christmas favourite ever since