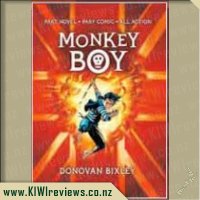 The Race for the Chinese Zodiac
Rating: 9.3

I sat down to read this with my 7 year old a week or so ago. At first the story seemed relatively tame, perhaps a bit gross. We meet our main character as he is going to the bathroom on the ship. But then the book took quite a dark horrific kind of turn. I skipped over all mention of the horrific thing and finished the chapter. Then I read something a bit less scary, after all it was bedtime.

For the parts that I did read to my daughter, she did seem to enjoy it. She found the way the bathroom worked to be fascinating and giggled a lot. As I had felt a little scared by that first chapter I didn't pick it up again for a week. But this weekend, I decided to try again without sharing it with kids at all.

It did not take too long before I realised that I was on page 77 and was really enjoying the book. The book moves around between a couple of characters and for the most part the characters are all really nice and relatable people. They are stuck in a crappy situation, but they are doing their duty and while it's hard work, it's still got a hint of family to it. Then there are the horrible characters, the bullies who you love to hate. And boy, did I hate them.

Towards the middle of the book, I was no longer feeling scared. There was still a battle to be fought, but the supernatural tones were no longer as horrifying. To me it felt a lot like a more grown up Paul Jennings tale. Though Jennings use to scare the crap out of me too. Bixley has something more going for him too - and that's the flare he has with illustrating. So not only can he weave a tale that puts your hairs on end, but then he gives you a visual of the dreaded thing. The mixture of novel and comic is done brilliantly, and is seamless.

I was already a big fan of Donovan Bixley's work, but this was my first go at something young adult from him. He did a great job, right down to the few times he breaks the fourth wall and talks directly to you. I had moments today when I lost all track of time. Picked up the book and suddenly 50 pages had been read, here and there. I can't believe how quickly the book melted away to the conclusion.

Exciting and action-filled, Monkey Boy is "part novel - part comic - all action". It is full of ghosts, ghouls and guts.

Set during the Napoleonic Wars on a British warship Jimmy is the smallest on board and is given the job of powder monkey which involves running gunpowder up to the canons. There is no sugar coating of what life on the seven seas was like at the time and so you are in for what feels like more of a real story. Jimmy joins the navy for two reasons, the main on being that he thinks it will be a life full of excitement, but this book is good for showing you that you don't always get what you wish for. Full of hilarious humour, with an excellent use of language you also get some real facts, not just non-fiction.

There is plenty to laugh and grimace about concerning bodily functions and lots of gory detail about illness and accidents but as long as you aren't squeamish you'll have a marvellous time. The mixture of comic picture scenes and novel are really well done and the balance is pitch perfect, neither takes dominance, it's still an easy to follow read, without feeling like it is simplifying things.

I really enjoyed this book, my six year old has sat down with the book several times to just browse through and so I have promised him that when Granny finishes reading him the Narnia Chronicles, I will read him Monkey Boy.

Clay has lived his whole life under the mountain. The MudWing dragonet knows that war is raging between the dragon tribes in the world outside - a war that he and four other dragonets are destined to end, according to the mysterious prophecy they've been taught. The five "chosen" dragonets were stolen from their homes while they were still in their eggs - and hidden away for years - all to fulfill the prophecy.