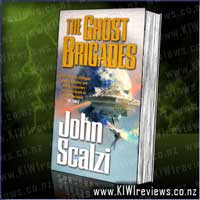 Disclosure StatementFULL DISCLOSURE: A number of units of this product have, at some time, been supplied to KIWIreviews by Macmillan Publishers Ltd or their agents for the purposes of unbiased, independent reviews. No fee was accepted by KIWIreviews or the reviewers themselves - these are genuine, unpaid consumer reviews.
Available:
April 2008

They are the special wing of the Colonial Defence Forces, elite troops created from DNA of the dead, and turned into the perfect soldiers for the CDF's toughest operations. The universe is a dangerous place for humanity as three races combine to halt our further expansion into space. Their linchpin is a turncoat scientists, Charles Boutin, who unfortunately knows the CDF's biggest military secrets. And to prevail against this alliance, they must find out why Boutin did what he did.

Jared Dirac is meant to provide answers, a superhuman hybrid created from Boutin's DNA so as to access his electronically recorded memories. But when this attempt seems to fail, Jared is sent to the Ghost Brigades. As Jared fights for his own survival, Boutin's memories begin to surface, and with them a plan for something much worse than mankind's military defeat.

After reading Old Man's War and being introduced to the concept of the Special Forces clone with an AI mind, I was quite keen to read more about them, especially after the way John Perry interacted with the clone body of his dead wife, when he discovered, through her, what it meant to be a Ghost, a Special Forces soldier. In this book, that side of the Human battlefront is explored in far greater depth, and I have to admit I enjoyed it a lot.

A little predictable in places, because of the background of certain key characters, this book still manages to throw a surprise or two at you, but don't expect a cliffhanger every chapter... it's just not that style of book. It shows the nature of growth, rather than the element of surprise, and though it is a sci-fi war story, it has a deeper side, a more thoughtful undercurrent that I found quite appealing. Scalzi has an intriguing style of writing that combines an almost romantic element with bloody battlegrounds and alien nasties... it's a bit like a lime-&-banana thickshake really, quite an acquired taste, but if you give it a try and like it, you'll love it. If not, it still carries itself well and is a good casual read.

Overall, a great way to blow away a lazy afternoon, soaking up a bit of sun, or wrapped up warm against the chill. If you enjoy the classic authors, you'll find this style of writing a bit like the Sector General series of books by James White. If that doesn't mean anything to you... then I'm showing my age a bit here.

Jingle bells! Rudolph smells from eating carrots and hay, went over a bump and he did a trump, and it went in Santa's face - hey. Laugh out loud as you sing along to this hilarious, smelly-as Christmas song... and find out how Santa's #1 stinky-bottomed reindeer saves Christmas.