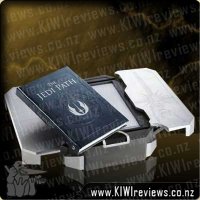 Disclosure StatementFULL DISCLOSURE: A number of units of this product have, at some time, been supplied to KIWIreviews by Scholastic (NZ) or their agents for the purposes of unbiased, independent reviews. No fee was accepted by KIWIreviews or the reviewers themselves - these are genuine, unpaid consumer reviews.
Available:
at selected booksellers

The Jedi Path, Fully Illustrated, with Removable Features and a Mechanical Vault

With the push of a button, the doors of the vault open in a wash of light and Star Wars sound effects. The inner platform rises, revealing this exclusive edition of The Jedi Path.

This ancient training manual, crafted by early Jedi Masters, has educated and enlightened generations of Jedi. It explains the history and hierarchy of the Jedi Order, and what Jedi must know to take their place as defenders of the peace in the galaxy - from mastery of the Force to the nuances of lightsaber combat.

Passed down from Master to Padawan, the pages of this venerable text have been annotated by those who have held it, studied it, and lived its secrets. From Yoda and Luke Skywalker to Count Dooku and Darth Sidious, they have shaped the content of the book by leaving mementos tucked within the pages, tearing out pages, and adding their personal experiences as tangible reminders of the lessons they've learned.

Through wars and rebellion, only a single copy of this manual has survived. It is now passed on to you.

Removable features: A letter tracing the book's history, a severed Padawan braid, a metal Jedi Credit medallion, a Jedi starfighter patch, a burned poster of the Jedi Code, a map of the Jedi Temple, a lightsaber diagram sketched on the back of a napkin from Dex's Diner, and a note on the missing pages torn from the book by a Sith.

Created in collaboration with Lucasfilm - along with an acclaimed Star Wars author and revered Star Wars illustrators - this volume provides new insights into the history and lore of the Jedi Order while introducing never-before-seen ships, creatures, characters, and details about how one trains to become a Jedi.

The Jedi Path is for adults, and is intended for ages 14 and up.

Whilst this is quite clearly a bit of a gimmick, and will only be bought by true Star Wars fans, it is none the less a brilliant bit of Star Wars merchandise and helps to add even more depth and realism to the universe that George Lucas and all those other fellows at LucasFilm created.

The contents of the book covers the process and steps from being accepted into the Jedi Order all the way through being a Jedi Initiate, a Jedi Padawan and finally a Jedi Knight. Each step has been well thought out and very well written. The included diagrams are also extremely well drawn.

What has really made this book for me were the little written side notes that have been scrawled in the various pages of the book, from the somewhat grammatically challenged writings of Yoda, through to the well structured and thought out musings of a young Qui-Gon Jinn, and finally the notes of the current owner Luke Skywalker. Each of these writings/notes have been well thought out and written in a style that accurately reflects the way the characters talked and how they thought as portrayed by the actors in the movies and TV shows.

The other bits and pieces that you get such as the Jedi credit medallion, the lightsaber diagram and the starfighter patch are really just icing on the cake, and it comes all neatly wrapped up in the well thought out and designed 'Vault'.

So while I think this is a bit on the pricey side, I still know for a fact that it will be eagerly snapped up by those true Star Wars fans, and in many cases it may not even be take out of the box, but to me that would just be a waste as it is such a well put together piece of Star Wars canon.

The Da Vinci Code and Angels and Demons have become publishing phenomena for author Dan Brown. With sales in the tens of millions and with a whole industry having grown up around the novels, a huge following has emerged, determined to trace the footsteps of lead character Robert Langdon and to delve deeper into the real mysteries behind the ... more...